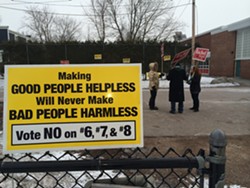 A legislative committee this week will consider gun-control charter changes that Burlington voters approved more than a year ago. But that doesn't mean the measures are going to make it into law.

“I have a feeling Burlington would spend a lot of time in court if these pass,” Sweaney said.

Her committee is scheduled to hear from legislative lawyers Thursday morning about the three gun-related charter changes, but the committee's agenda includes no other meetings on the subject, signaling that no further action is planned. Vermont municipal charter changes are subject to legislative approval.

Burlington voters in March 2014 approved changes to the city charter that would:

• Allow police officers to confiscate weapons from suspected domestic abusers.
• Prohibit guns at Burlington bars and other establishments with a liquor license.
• Require guns be stored in locked containers or with locks.

Sweaney said legislative lawyers have questioned whether it would be legally sound to confiscate weapons from someone who is suspected, but not convicted, of domestic abuse.

She said legal questions also have arisen about prohibiting someone from leaving a gun in a locked car in the parking lot of any establishment with a liquor license.

Lawmakers usually approve charter changes quickly, deferring to the will of local voters. But these changes led to immediate questions and legislators took no action on them last year. Gun-rights activists strongly oppose the charter changes and questioned whether they run counter to state law. A 1988 state law prohibits municipalities from regulating firearms “except as otherwise provided by law."