Medical App From Burlington Debuts in Bangladesh | Off Message 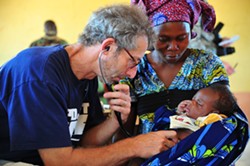 A medical mobile app designed to save the lives of children with potentially life-threatening medical conditions has begun its first phase of field testing, in Bangladesh, and is already showing very encouraging results.

As Seven Days reported in its March 4 story, "Pocket Pediatrics: A Vermont-Made App That Could Save Kids' Lives," pediatricians at the University of Vermont Medical Center in Burlington worked with Vermont software designers to build an app. It enables frontline health care workers to determine the severity of a child's ailment and then provide immediate treatment recommendations. The app, called MEDSINC — short for Medical Evaluation and Diagnostic System for Infants, Newborns and Children — has the potential to save millions of lives each year in low- and middle-income countries that often lack medical staff with pediatric expertise.

Dr. Barry Finette is the Burlington pediatrician, pediatrics professor and director of UVM's Global Health and Humanitarian Opportunity Program who first conceived of the idea after years of working in developing countries where pediatricians are virtually nonexistent. Finette reported Tuesday that MEDSINC's rollout, at two field clinics in the Mirpur region of Dhaka, received enthusiastic responses from medical teams with the International Center for Diarrheal Disease Research and their Bangadeshi health care partners, all of whom are eager to continue with future testing.

"As anticipated, some community health workers experienced challenges in collecting accurate physical exam findings," Finette writes in a monthly newsletter for THINKmd, the Burlington-based benefit corporation formed to launch this and other humanitarian aid-oriented apps. "However, with a little training, they were able to capture accurate data."

According to Finette, health workers on the ground in Bangladesh identified areas in MEDSINC’s user interface that were somewhat difficult to understand, and also supplied his team with several helpful suggestions for improvements. Those suggestions are being incorporated into the product.

"Our near-term goal for MEDSINC is to continue with field testing at several different locations," Finette adds. "We are currently finalizing plans with key collaborators in Central and South America, where we hope to conduct MEDSINC field tests soon."

Finette had even more good news to report today: THINKmd has been selected as a finalist for the LaunchVT business pitch competition. The first prize for LaunchVT is $30,000 in cash and $45,000 of in-kind support.

"We are excited for the opportunity," Finette writes in an email, "and look forward to hearing feedback from the audience about our company and MEDSINC venture.” Winners of the LaunchVT business pitch competition will be announced on May 7.