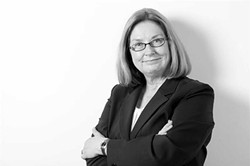 Attorney General Bill Sorrell has accepted $3,500 in fines to settle a complaint against a former South Burlington city councilor who failed to disclose spending on behalf of two allies during a 2013 election.

In the settlement agreement, former South Burlington City Council chair Pam Mackenzie, who controlled a political action committee called Pam PAC, acknowledged failing to disclose expenditures made on behalf of Patricia Nowak and Chris Shaw, who won seats on the council with her help.

Pam PAC will pay $2,000 and will file corrected campaign finance reports, Sorrell said. Nowak and Shaw will each pay $750 and file corrected reports.

"The state’s resolution of this matter should make clear that when people or entities pool their money to fund advertising in support of candidates they become a political committee and must register and file reports with the secretary of state’s office," Sorrell said in a prepared statement.

Pam PAC paid for three full-page ads in South Burlington’s Other Paper as well as a full-page ad in the Burlington Free Press, all touting Nowak and Shaw. Both challengers, who ran as a team, beat incumbents on the city council.

One of the losing incumbents, Paul Engels, filed a complaint with the attorney general about Pam PAC's spending.

Sorrell said his investigation determined that Mackenzie discussed strategy and planned the ads with Nowak and Shaw. Because of that coordination, the ads are considered in-kind contributions that candidates are bound to disclose. Additionally, since the value of the ads exceeded the $3,000 cap on contributions to the candidates, they violated the state's campaign finance contribution limit, Sorrell said.

Nowak and Shaw remain on the council. Mackenzie resigned in October, saying she no longer had time to devote to the position.