Super Troopers 2 Is Ready to Shoot, Soliciting Crowdfunding | Off Message 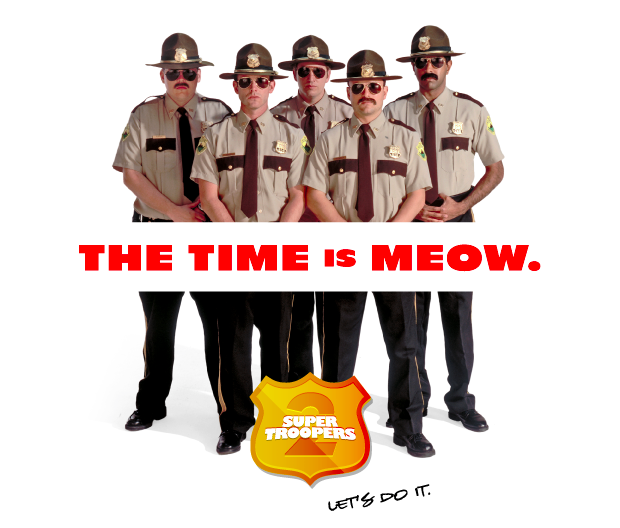 It's been a pretty lousy time here in Vermont. Temperatures haven't climbed above zero since August, according to the Seven Days meteorology department. Water pipes seem to be cracking every few minutes. Even our maple syrup season is running late.

But along comes news that reminds us of all that is good and just in Vermont and the world.

The men of Broken Lizard, better known as the maple syrup-chugging, meowing, faux Vermont State Police troopers from the cult film Super Troopers, announced yesterday that they have written a sequel and hope to begin filming this summer.

"We’ve been waiting for years to do this, and meow the time has come," the comedy troupe announced yesterday. "Our mustaches are thick, furry, and authoritative. The script is written and we’re getting all antsy in our pantsy to start shooting. There’s just one problem..."

They need money. On their Indiegogo crowdfunding page, Broken Lizard says it needs to raise at least $2 million to make the movie. Anything above $2 million would allow the team to make the "best movie ever" complete with "more full-frontal Farva" and "the ability to hire someone who knows how to operate a camera."

Judging from the early results, Captain O'Hagan will be pistol-whipping anyone who says "shenanigans" again in no time. As of this writing, which comes one day into the fundraising campaign, the comedy troupe has raised more than $1.9 million.

Broken Lizard didn't reveal much about the script, or where they would film Super Troopers 2. (The original movie was filmed in upstate New York.)

Perks for donations include copies of the script, aviator glasses and a badge, premier tickets, and even an appearance as an extra in the film. We at Seven Days are passing the hat in hopes of scrounging up $35,000, which would score us one of the patrol cars used in the movie: The chickenfuckers at other Vermont media outlets would be totally envious of our new company vehicle.