Thousands Turn Out for Ticket Amnesty Day | Off Message 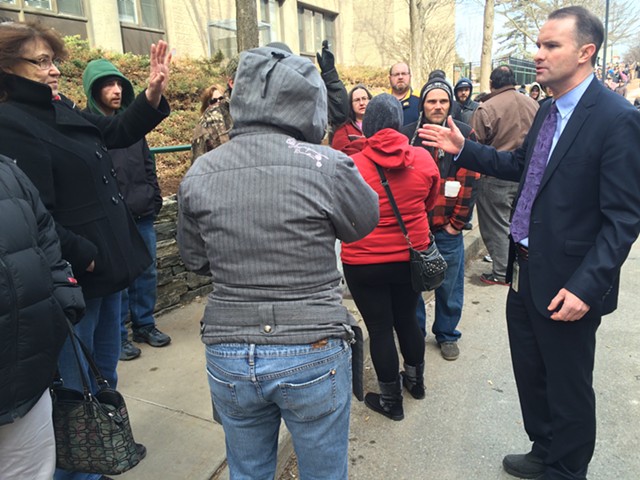 One relatively minor traffic ticket from 2006 has badly complicated Jennifer Jennison’s life. She ran a stop sign and didn’t immediately pay the fine. A dumb mistake, she now knows. Penalties kicked in. Her driver's license was eventually suspended. She had three kids and little money. She kept driving, got pulled over a few more times and was issued more tickets — for driving without a license.

For the past few years, Jennison — unable to pay off several hundred dollars in fines — has made only occasional trips from her Colchester home, for fear of accruing additional tickets.

“It’s completely isolating,” Jennison said. “You feel awful because you can't do much. My kids always complain that they’re bored because we can’t go out. It’s degrading. I made the bad choice, but if I could have done it, I would have taken care of it. It’s not that easy.”

Jennison was one of more than 1,000 people who waited in line for several hours in downtown Burlington Friday morning to take advantage of Driver Restoration Day, during which suspended drivers could pay $20 for each unpaid ticket and get on the road to license reinstatement.

The event, the first of its kind in Vermont, was the brainchild of Chittenden County State's Attorney T.J. Donovan, who said he wanted to stop low-income people from having to choose between regaining their license by paying off tickets and other daily necessities.

Roughly 22,000 Vermonters have delinquent traffic tickets, Donovan noted. Many of them are unable to pay and consequently lose their licenses. But they still drive to get to work or to care for their families, even though a citation for driving with a suspended license can eventually lead to criminal charges. People also need a valid license to obtain auto insurance, so many are driving without insurance.

The amnesty event, Donovan said, was designed to lift people out of that downward spiral.

"We're putting people in a hole financially," Donovan said. "It's in the interests of public safety to get people reinstated.  It's not making excuses.”

“It’s a poverty trap,” Vermont Legal Aid attorney Chris Curtis said as he chatted with people in line, urging them to be patient while they waited. “It pushes you deeper and deeper in debt and hurts your ability to get a job.”

Residents with tickets issued in Chittenden, Lamoille, Franklin, Grand Isle and Washington counties were eligible for Friday's program. (Donovan said he reached out to state’s attorneys — who had to sign off on the amnesty — from all neighboring counties. Addison County declined to participate.)

Officials figured they would get a strong turnout. But they didn’t expect the line that extended from the courthouse on Cherry Street, around the building and onto Pearl Street. As the hours ticked by, it never seemed to shorten.

Most people interviewed by Seven Days said they had between two and four unpaid tickets, and roughly $400 or $500 in outstanding fines. Washington County State’s Attorney Scott Williams said the highest tally he had seen was a man who came in to pay off 23 tickets.

The line was several hundred people deep by the time the building opened at 8 a.m. The average wait to get inside was more than three hours, and once there, people said, it generally took another hour or two to meet with one of more than two dozen court clerks, Department of Motor Vehicles employees, state prosecutors and lawyers from the Vermont Attorney General's Office who spent the day processing cases. People who paid off the tickets were told they could obtain licenses in about 10 days.

Several officials said the higher-than-expected turnout suggested that other counties should hold similar events. Donovan said he would consider staging it again in the future.

Among the early birds were sisters Becky and Melissa Blaisdell of Milton, who showed up at 7 a.m. Three hours later, a couple of hundred people still stood between the Blaisdells and the courthouse.

Melissa Blaisdell said she was pulled over in 2013 for an obscured license plate, never paid the ticket and quickly had her license suspended. She couldn’t afford to pay what she owed, but she had to get her children to medical appointments in Burlington. Tickets and criminal charges of driving with a suspended license soon followed.

“I didn’t know if you didn’t pay your ticket that you lose your license,” Melissa Blaisdell said.

Becky Blaisdell, who lost her license due to similar problems, said she was forced to bum rides or hitchhike to get to work in Colchester. Both women said they had enough money to take advantage of the amnesty.

Some groused about the long wait, and sporadic accusations of line-jumping could be heard. But most people waited patiently and said they were grateful for the opportunity. “It’s worth it,” one woman told her friend. “I’m going to get legal.”