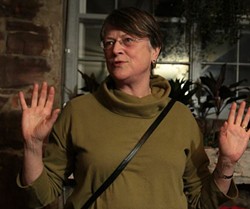 Progressive Jane Knodell is running for president of the Burlington City Council, and says she’s lined up the seven votes she needs to clinch it.

The vote takes place when the newly elected council convenes on April 6.

When the Democrats lost their majority on Town Meeting Day, Knodell quickly emerged as the Progs' pick to replace the current council president, Joan Shannon. When she took the stage at the party's victory bash at Magnolia Bistro, several people in crowd shouted "Council president!" Late last week, Knodell told Seven Days she was considering heeding those calls.

Knodell has logged 16 years as a city councilor and has served as the body's president in the past. By day, she's an economics professor at the University of Vermont, where she also previously served as provost.

Knodell was not immediately available to comment but in her email she said she plans to meet with each Democratic councilor before the vote to discuss "the kind of leadership they hope to see from their council president, what they hope the council can accomplish over the coming year in strong collaboration with the mayor and his administration, and where they see themselves being most engaged."