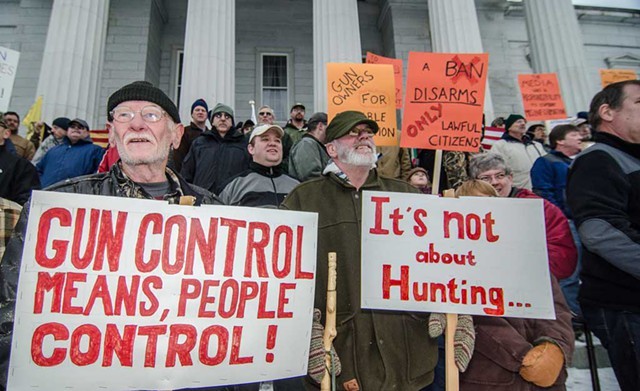 Gun Sense Vermont cofounder Ann Braden conceded Tuesday that her group is unlikely to achieve its goal this year of requiring near-universal background checks for gun buyers. But she expressed hope that two other provisions in a controversial gun-control bill may still move forward before the end of the legislative session.

“We have a very long view on this,” Braden said. “Two years ago, there wasn’t any way any gun provision would be debated. This is a long-term campaign to really change the conversation, so we can pass legislation to keep guns out of the wrong hands.”

“I always knew that the first part was going to be a little difficult — the background checks — but [in] these other two areas, I think there’s sufficient evidence to show how useful it can be and how this can and will save lives,” he told the newspaper.

Gun-rights activists are opposing all provisions of the bill, S.31, according to Vermont Federation of Sportsmen's Clubs vice president Evan Hughes. He maintains Vermont is one of the safest states in the nation and has no need for changes to its gun laws. Hughes and others see such changes as a violation of their constitutional right to bear arms.

Sears is setting out to show that some gun-safety provisions make sense. His committee will focus on a single question during a hearing Wednesday: “Should Vermont have a law that would prohibit a person convicted of a violent crime and/or certain drug trafficking offenses from possessing a firearm?”

Law enforcement officers who previously declared opposition to the background checks portion of the bill will testify in support of a state law prohibiting felons from possessing guns, Sears said.

Sears said he was convinced that expanding background checks to private sales was a mistake after he visited a local gun shop. Its owner told the senator that if two parties asked him to conduct a background check for transfer of a hunting rifle, he would charge the buyer $45, which seemed impractical, Sears recounted.

“There’s a reason Congress left it the way it is,” he said.

Braden said she hasn’t given up on expanding background checks eventually.

“This isn’t our last year,” she said.