Francis Brooks, the soft-spoken church deacon who’s been the Statehouse sergeant-at-arms since 2007, sat in his office off the building’s grand lobby Thursday and took on some of the odd requests that typically come his way.

His former legislative colleagues were due to vote later in the morning on whether to reelect him to a two-year term. Brooks knew the score. He had seen the way some wouldn’t make eye contact with him.

Brooks, 72, of Montpelier, opened a letter that had found its way to his office. It was addressed to the "State of Vermont, State Street, Montpelier." Inside, a woman had included the title to a car, a death certificate and some instructions.

Why the letter reached Brooks was unclear, but the sergeant-at-arms, as the manager of the building at the heart of state government, deals with a lot of unusual requests. Brooks looked through the documents and worried about getting them to their proper destination, presumably the Department of Motor Vehicles.

An hour later, Brooks climbed the stairs to the second-floor House chamber to usher lawmakers in for the joint session. They were to either reelect him sergeant-at-arms or go with Janet Miller, who worked down the hall from him as Legislative Council deputy operations director. A third candidate, Chuck Satterfield, had withdrawn from the race.

In the past week, Brooks had the growing sense that his reelection was at risk. No one had quite made clear what they were unhappy about, he said, whether security concerns, the way he scheduled use of Statehouse rooms or because he busted one too many legislators for drinking coffee in Room 11. 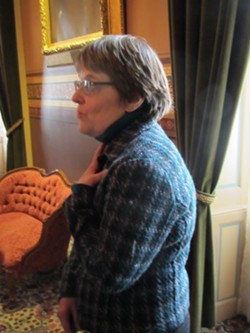 In the high school atmosphere that sometimes pervades the Statehouse, Brooks, a former Democratic legislator who once served as House majority leader and chairman of a House committee, felt like his former friends were conspiring behind his back.

Security clearly was an underlying issue for some. Protesters had interrupted the governor’s inaugural ceremony weeks before.

The two legislators who nominated Miller for the office are the chairs of the House and Senate Institutions committees, which oversee state buildings.

But House Institutions Chair Alice Emmons (D-Springfield) said, “For me, it’s not the issue of Statehouse security. I saw it as time for a change. It’s just a feeling it’s time for someone who’s more engaged.”

Miller, 58, of Montpelier, said when legislators recruited her to run for the job, some cited Statehouse security protocols as a reason, though she has no background in security. “I think it definitely needs to be addressed,” she said. “The staff has concerns.” Asked whether she thinks the building needs metal detectors, Miller said, “I don’t know yet, to tell you the truth.”

Miller will be leaving a job that pays about $5,000 more than the $64,500 the sergeant-at-arms makes. She said the issue came up when she agreed to be a candidate, and she expects to negotiate a pay raise.

Though many suspected Miller was likely to win, few knew the result would be so lopsided. Brooks stood at the House chamber door, as is his job, when the tally was announced: 128 votes for Miller, and 47 for Brooks.

Lt. Gov. Phil Scott, presiding over the Joint Assembly, thanked Brooks for his service. Legislators gave him a standing ovation. Brooks slipped through the door, down the stairs and out of the building. He will remain in office through February.