But Wednesday night, the Senate Republican PAC is hosting a Montpelier fundraiser to collect money from — you guessed it — registered lobbyists.

According to Green Mountain Republican Senate Committee treasurer Suzanne Butterfield, legislators and lobbyists alike have been invited to the Capitol Plaza to "exchange ideas and basically have a social get-together." Attendance costs $200 per person, and sponsorships range from $500 to $1,500.

"I just go through the list of lobbyists — the ones that I know personally — and invite them, and they invite some of their corporate clients," Butterfield explains. "It's not a huge financial event, but it's fun and it's a little something." 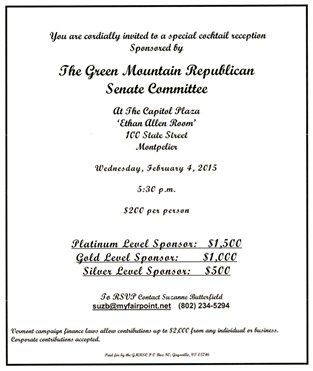 Under current law, legislators are barred from raising money for their own campaigns from lobbyists and the companies that employ them until the end of the legislature's two-year biennium. But for years, Democrats and Republicans alike have skirted the law by raising lobbyist cash through the PACs they control.

Those PACs then use the money to elect their own candidates.

The Republican House members spoke out about the issue ahead of a fundraiser benefiting the House Democrats' PAC.

Sen. Joe Benning (R-Caledonia), the Senate minority leader, says he hasn't yet read Wright's and Komline's bill, but he agrees with it in concept.

"It's kind of standard practice for both parties thus far to hold these kinds of functions," he says. "And I think it would make a cleaner environment if we didn't have to get into these kinds of activities while the session is taking place."

Nevertheless, Benning plans to attend Wednesday's fundraiser. He says he tries to honor all invitations he receives.

While Benning says he does not directly control the Green Mountain Republican Senate Committee, he does advise Butterfield during the campaign season on which candidates the PAC should support.

For her part, Butterfield says there's nothing wrong with the fundraiser she's hosting. She says she does not support Wright's and Komline's bill.

"They're just businesses that want to help. I don't think they're buying influence in any way or access," she says. "Maybe I'm naive, but I don't think it's used that way at all."