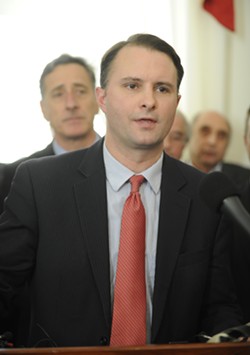 Late this week or early next week, Sen. David Zuckerman plans to introduce legislation to legalize marijuana in Vermont.

Chittenden County State’s Attorney T.J. Donovan says he's in no hurry to endorse the idea. But as he prepares for the debate, it occurs to him that he has no idea what a marijuana retail store looks like.

He’s also having trouble deciphering contradictory reports from 2,000 miles away about whether legalizing marijuana has made Colorado roads more dangerous or not.

So Donovan, state Public Safety Commissioner Keith Flynn and others are headed to Colorado next week. They hope to get a firsthand look at the first state to legalize recreational use of marijuana.

“I called Keith Flynn up and said, 'We should go there, because I can’t separate fact from fiction,'” Donovan said. “Keith agreed.”

A report issued last month by the RAND Corporation detailed aspects of Colorado’s experience as the first state to legalize marijuana. The report's authors indicated much of the law's impact is still evolving a year after retail sales became legal.

Many Vermont officials, including Gov. Peter Shumlin, have said they believe Vermont should wait for more information from Colorado and elsewhere before proceeding.

Zuckerman (P/D-Chittenden) said he hopes Senate committees will at least start considering his bill this year.

His legislation will reflect lessons already learned from Colorado, he said. That state has found that some unwittingly consume too high a dose of marijuana edibles. Zuckerman’s bill will include regulations governing the size of edible portions.

His bill will also try to put a Vermont stamp on marijuana legalization. Farmers would be permitted to grow half of the wholesale marijuana in the state, said Zuckerman, who is himself a farmer. In an attempt to keep large, out-of-state interests at bay, only modified public-benefit corporations could produce the stuff. Zuckerman said he’s proposing a $40-an-ounce tax on marijuana. Revenue would be targeted to pay for enforcement, drug prevention and other specific programs.

He estimates that would generate $25 million a year from in-state users and more from out-of-state visitors.

Retail stores and clubs would apply for permits from the state. Unlike in Colorado, the number of permits available would be limited.

Zuckerman said that while his bill will set out many parameters for legalization, he knows he hasn’t thought of everything.

“I don’t know the perfect formula,” he said.

Whether or not Zuckerman’s bill passes this year, it is likely to generate considerable debate. Donovan said he needs to be ready for that debate.

“We’re going to be asked questions about it,” he said. “I want to give informed answers.”

Donovan said his voyage to Colorado will be packed with meetings and visits, including with Gov. John Hickenlooper’s office, a tour of a marijuana growing facility and chats with ordinary citizens.

Joining Donovan and Flynn on the Sunday-Wednesday trip will be:

Young said he wants to hear what impact, if any, schools have seen on student behavior and performance since Colorado legalized marijuana.

“Are there any effects on families?” he said. “If there’s a wave of problems with kids and families, somebody should have seen something.”

Young said he wants to know whether police are seeing more impaired drivers and how they detect marijuana use. He also wants to hear from consumers.

"I'd like to talk to somebody who smokes dope," he said.

Mickenberg said he has visited Colorado medical marijuana facilities but has not returned to the state since recreational marijuana sales became legal.

“I think it’s an incredible opportunity to see how it works,” Mickenberg said.

He said he’s interested in seeing how marijuana operations are regulated, how highway safety has been affected and what the impact has been on youths.

“It’s all the sticky issues that the legislature’s going to grapple with this session or next,” he said.

Donovan said he’ll pay for his trip with asset forfeiture money his office collects. Those funds can be used for law enforcement training and education, he said.

Mickenberg said his costs will be paid by his client, the Marijuana Policy Project. Young said he and Maple Leaf will pay his way.

Along with talking to officials who’ve had personal experience with Colorado’s law, Donovan says he wants to walk into a marijuana store in Denver and see what it looks, feels and smells like.

Even though it’s legal there, he said, “I’m not going to sample. I will have no brownies.”