Vermont GOP Official to Travel to Israel With 'Extremist' Group

A top Vermont Republican plans to travel to Israel Saturday on a trip financed by a right-wing Christian group that has espoused racist, homophobic and Islamophobic beliefs.

Susie Hudson, a Montpelier resident and longtime Vermont representative to the Republican National Committee, will join roughly 60 fellow RNC members on the nine-day tour, according to Israel's Haaretz newspaper. The trip was organized and sponsored by the American Renewal Project, an arm of the Mississippi-based American Family Association.

AFA has been called "extremist" and a "hate group" by the Alabama-based Southern Poverty Law Center.

"Basically an offer was extended, from what I understand, to RNC members, political folks and members of the media to go on this trip to Israel," Hudson said Thursday. "We were just told it's being made possible by the American Renewal Project and the American Family Association."

The AFA, which says its mission is "to strengthen the moral foundations of American culture," has repeatedly denigrated gays, African Americans, Latinos, Muslims, Native Americans and other groups, according to SPLC research. Bryan Fischer, who served as AFA's spokesman and director of issue analysis for six years until he was demoted Wednesday, has blamed the Holocaust on gays.

Asked about the trip Thursday after blogger John Walters wrote about it on the Vermont Political Observer, Hudson said, "I mean, I know there's been some stuff that's been out in the press yesterday, but it's my understanding that there was an individual who made some inappropriate comments, and I certainly don't agree with them, and it's my understanding they are no longer with the organization."

Hudson said she was referring to Fischer.

But, she said, "I did not know that whatever group you said has called them a hate group."

Hudson, who was elected national secretary of the RNC earlier this month, repeatedly declined to say what she understood AFA's beliefs to be.

"All I can tell you is an offer was extended to go on a wonderful visit to Israel, visit the holy land and walk where Jesus walked, and it was an incredible opportunity that was offered to us as members, and that's what I know," she said.

After learning more about the trip's sponsor, was she still planning to take part in it?

"I guess the question is, 'Why wouldn't I go with my peers?'" she said. 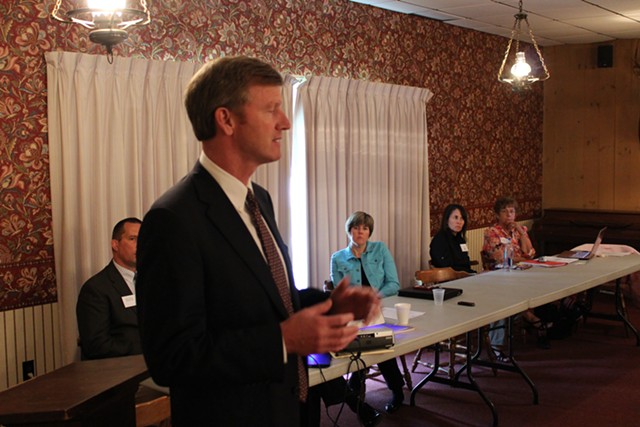 According to Time, RNC chairman Reince Priebus emailed all 168 members of the national committee last November to invite them on the trip. He wrote in the email that the all-expenses-paid tour was "made possible through the generosity of David Lane's American Renewal Project and the American Family Association."

Lane, an evangelical political operative, has committed to helping 1,000 Christian pastors win election to public office in 2016, the Washington Times reported in November.

As media scrutiny of the RNC trip intensified, AFA president Don Wildmon told MSNBC's "The Rachel Maddow Show" Wednesday that he had removed Fischer from his post, saying the organization rejected Fischer's comments linking Nazis to gays. Mediaite subsequently reported that while Fischer had been removed from his posts as spokesman and director of issues analysis, he would continue to host a radio show for the organization.

In a letter sent Wednesday to SPLC emeritus board member Julian Bond, AFA general counsel Patrick Vaughn wrote that his organization "has concluded that it must renounce some statements made by" Fischer. Vaughn said the AFA "has never held these views," specifically listing eight claims Fischer has made over the years targeting gays, African Americans, Latinos, Muslims, Native Americans and Hillary Clinton.

SPLC president and CEO J. Richard Cohen responded Thursday in a letter saying "it's difficult to see the AFA's disavowal as anything other than an effort to quell the negative press attention you're receiving in connection with" the RNC trip. Cohen noted that Fischer "has been making bigoted statements for years" and that he remains an AFA radio host.

Indeed, when Seven Days wrote about the AFA's inclusion in a state charitable giving campaign in September 2013, the organization made Fischer available to explain its beliefs.

“The truth is, we don’t hate anybody,” Fischer told Seven Days. “We love everybody and we love them enough to tell them the truth about homosexual conduct.”

“And that truth is?” we asked.

And does he really believe gays are responsible for the Holocaust?

“The truth is that the Nazi Party was formed in a gay bar in Munich. The truth is, the bulk of Hitler’s storm troopers were homosexuals. These are indisputable, historical facts. They are not open to interpretation,” Fischer said. “So if someone has a problem with those assertions, their problem is not with me. Their problem is with the historical record.”

The Vermont Democratic Party appears interested in capitalizing on Hudson's participation in the trip. It linked to Walter's story in a Facebook post Thursday, writing, "Meanwhile, check out what Susie Hudson, prominent Vermont Republican and Secretary of the Republican National Committee is up to..."