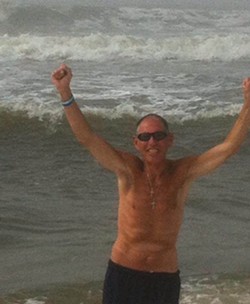 Updated at 5:30 p.m. with additional comments from former inmates.

Through his arrest, conviction and years of fruitless appeals from prison, John Grega insisted that he was innocent. Someone else, Grega insisted, had raped and murdered his wife while the couple vacationed in West Dover in 1994.

In 2012, after 18 years behind bars, Grega walked out of prison a free man, the first and only Vermont inmate to be exonerated on the basis of DNA evidence.
"I always said I would walk out," Grega said after he left Southern State Correctional Facility in Springfield to cheers from his fellow inmates, according to the Bennington Banner. "I never gave up. I feel good."

His freedom was short-lived. Grega 52, died on Friday night, after his van smashed into a telephone pole in his hometown of Lake Ronkonkoma on New York's Long Island.

"It's just so sad and tragic," said Gordon Bock, who served time in a Swanton prison with Grega and kept in touch after they were released. "He went through this horrible, 18-year experience, came out the other end and only a few years later ... I'm having a hard time with this."
Christine Grega was found dead on the evening of September 12, 1994, strangled, raped and beaten. When interviewed by police, Grega, who had no criminal record, initially said her injuries were accidental, and later blamed two painters working in the condo complex for her death. Later, at his trial, he said he was at the park with his son when the murder occurred.

Though there were no witnesses or physical evidence, a jury convicted Grega of murder and sexual assault in 1995. He was sentenced to life in prison without parole.

Grega worked on his case from prison. But it wasn't until 2008, when Vermont passed a law allowing convicted felons to request DNA testing not previously available, that his appeals gained momentum. The Vermont Defender General's Office and the New England Innocence Project got involved.

In May 2012, the Vermont Forensic Laboratory concluded that Grega was "excluded as the source of the major contributor of DNA in the most relevant sample."

He moved back to New York, and tried to enjoy life's daily pleasures.

“I jumped in the pool around 6 a.m.,” Grega told the New York Post about his first free morning. “I lit up a cigar and watched the sun come up. It’s just the simple things. I had a cup of coffee with my mom in the kitchen.”

In July 2014, Grega filed a lawsuit against former Windham County state's attorney Dan Davis, the town of Dover and three members of the Vermont State Police who were involved in the investigation. A hearing in federal court was scheduled for next week. (Generally, lawsuits are allowed to proceed if the plaintiff dies. Grega's estate would be the primary beneficiary. Calls to his attorney were not immediately returned.)

Bock had planned to attend the upcoming hearing in Grega's lawsuit, to support his friend and catch up. They first met in the law library in the Swanton prison, which Grega helped run for years. Bock went there to research his own appeal, and Grega was always eager to help.

"He helped countless men over the years feel some sense of empowerment in dealing with the outrages of the legal system," Bock said. "It was miraculous that [for] someone who knows he is wrongfully in for 18 years ... he maintained a really positive attitude. He embodied what Gandhi said about sometimes the best way to help yourself is to help others."

Among those Grega helped was Jason Mode, another Swanton inmate. Mode compared Grega to Andy Dufresne, the protagonist of The Shawshank Redemption.

“That’s John Grega. That’s the type of person he was,” Mode said. “He worked in the law library, he came and went as he pleased, he was one of those guys that nobody bothered, nobody messed with him. He was always willing to help everybody and anybody.”

They kept in touch after they were released, mostly through Facebook, which was where Mode learned of his death.