Sanders Headed Back to Iowa in February | Off Message

Sanders Headed Back to Iowa in February 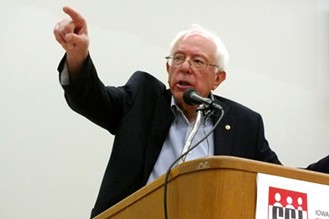 Sen. Bernie Sanders (I-Vt.) plans to return to Iowa next month as he continues to ponder a presidential campaign.

The Des Moines Register reported last week that the two-term senator will spend three days in the Hawkeye State, from February 19 through the 21st. He's scheduled to hold town hall meetings in Iowa City and Des Moines; keynote events in Johnston and Ames; and attend meetings in Cedar Rapids and Tipton.

Next month's trip will be Sanders' first to Iowa this year — and his fifth since he began publicly mulling a 2016 bid early last year.

Sanders told reporters last year that he'd decide whether to run for president after the 2014 midterm elections. In December, he put off the decision further, telling the Associated Press he'd make up his mind "by March."