The case against a Burlington man charged with concealing violent crimes he allegedly committed during the Bosnian War was littered with false accusations and contradictory testimony, his attorney said in closing arguments today 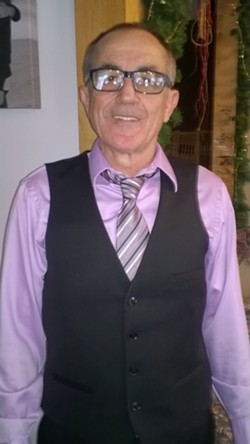 Jurors began deliberating the fate of Edin Sakoc at 2:15 p.m. after hearing from attorneys for the final time in the two-week trial.  After nearly six hours of deliberations, jurors went home shortly before 8 p.m. without reaching a verdict. They were scheduled to return in the morning.

Sakoc, 55, faces several years in prison and possible deportation if convicted of lying to immigration officials about his conduct during the Balkans conflict.

Sakoc is accused of kidnapping and raping one woman and assisting a soldier who murdered two other women in 1992. He is a Muslim, and the women he is accused of targeting are ethnic Serbs. The two groups clashed violently during the early 1990s war.

During a nearly 90-minute closing statement, defense attorney Steven Barth said that Sakoc had not lied to immigration officers because nothing he did in Bosnia qualified as a crime that he was required to disclose. Barth told jurors that Sakoc never committed a rape, and was acting on orders when assisting a fellow soldier who murdered two women.

"In order to lie you have to know and believe that what you are saying is not true," Barth told a U.S. District Court jury in Burlington. "The government simply cannot prove its case because their narrative of what happened is based on testimony that is so full of inconsistencies, changing statements and outright fabrications made by [people] with ingrained prejudices."

But prosecutors said witnesses had supplied "overwhelming" evidence that Sakoc engaged in heinous crimes that he knowingly concealed.

"We are not here to prosecute Mr. Sakoc for what he did that night," Jay Bauer, a prosecutor from the Justice Department's Human Rights and Special Prosecutions Section, said during his closing statement. But, he said, Sakoc ran from his past and built a life on lies in the United States.

After deliberating for an hour, jurors asked to listen again to nearly two hours of recordings of Sakoc talking to investigators and to his wife that prosecutors had introduced into evidence earlier in the trial.

The recordings were of interviews that Sakoc gave to federal investigators — several months before he was charged, and shortly after he was arrested inside his home on Riverside Avenue in Burlington. Additionally, jurors requested a transcript of a phone call that Sakoc made to his wife from prison. (Prison phone calls are recorded.)

In the interviews with investigators, Sakoc denied committing any crimes, but acknowledged being present at some of the events in question. He spoke freely on both occasions, waiving his right to silence, which his attorneys have argued shows he had nothing to hide.

During the prison phone call, Sakoc appeared to plot ways to persuade witnesses in Bosnia to change their story.

Barth suggested that Sakoc has been targeted because of ethnic tensions that linger in Bosnia. Most of the witnesses in the trial have been ethnic Croats, a group that initially fought alongside the Muslims but violently turned on them and engaged in ethnic cleansing. (Most witnesses testified in Bosnia last year. Jurors spent much of the trial watching video recordings of that testimony.)

Several witnesses have changed details of their stories in ways that incriminate Sakoc, Barth said.

"The narrative has shifted to make Mr. Sakoc closer to the crime," he said.

And, as he did during trial testimony, Barth vigorously challenged the testimony of the alleged rape victim. The woman had been interviewed 10 times by international and American investigators, Barth said, and either never mentioned a rape, or denied being raped. Then she said that Sakoc raped her.

Prosecutors told  jurors that it was important for America to uphold restrictions on people it allows to become citizens.

"He got that prize he wanted so badly — U.S. citizenship," Bauer said. "And it is a prize. That's why this case is so important. We are a welcoming nation, but we can't let in every person. We have to find a balance between opening our arms ... and politely closing the door on others."

Government officials have not explained how the investigation into Sakoc began. The stay-at-home dad does not have a criminal record, and had settled into middle class life in Vermont. He is not facing any charges or arrest warrants from foreign authorities.

While the courtroom gallery had been relatively empty most of the trial, closing arguments drew a large audience of Sakoc's friends, some of the witnesses who testified earlier in the case, college students, curious lawyers and courthouse staffers.