A tri-partisan group of Vermont lawmakers on Thursday called for the state to partner with the federal government to help run its health insurance exchange.

Members of the centrist coalition said Vermont should follow the lead of Oregon, Nevada and New Mexico in transitioning Vermont Health Connect to what's known as a federally supported, state-based marketplace. Such arrangements leave the states largely in charge of their health exchanges, but take advantage of federal information technology systems.

"What we have here today is a viable alternative," Rep. Patti Komline (R-Dorset) said at a Statehouse press conference. "We're not just playing political games with it."

"Vermonters deserve a functioning insurance portal," Condon said. "And they don't have that yet."

The group's proposal does not go as far as one offered by House Minority Leader Don Turner (R-Milton) and other top Republicans, who argue that the state should drop Vermont Health Connect altogether and adopt the federal exchange, healthcare.gov, which is used by 37 states.

Critics of the Republican proposal say it would prevent Vermont from offering state subsidies to low- and moderate-income families. It could also imperil federal subsidies, if the U.S. Supreme Court rules later this year that only state-based exchanges are eligible for those provided by the Affordable Care Act.

But Komline and her colleagues say their proposal would protect Vermont's existing health insurance plans and the subsidies that go with them. It would simply outsource certain technical aspects of the exchange to the feds, they say.

"It's clear we don't do IT well. That's the bottom line," Scheuermann said. "We cannot do this correctly and we cannot do it well."

The lawmakers said they believed their plan would save the state money, though they are still researching the numbers.

"This is not about money," Greshin said. "We think, actually, this is a lower-cost way to do it, but this is about, as Rep. Komline said at the beginning, this is about getting an exchange that works. And I think we owe that to our constituents, too many of whom have called to ask our advice on how to navigate the exchange. And I think the calls that we've received have moved from questioning to aggravation to, in not an insignificant number of cases, desperation."

The press conference, held around a table in the Ethan Allen Room, was attended by two top advisers to Gov. Peter Shumlin: Floyd Nease, who serves as a health care liaison to lawmakers, and Lawrence Miller, Shumlin's chief of health care reform.

After the event ended, reporters turned to Miller, who held an impromptu press conference of his own. 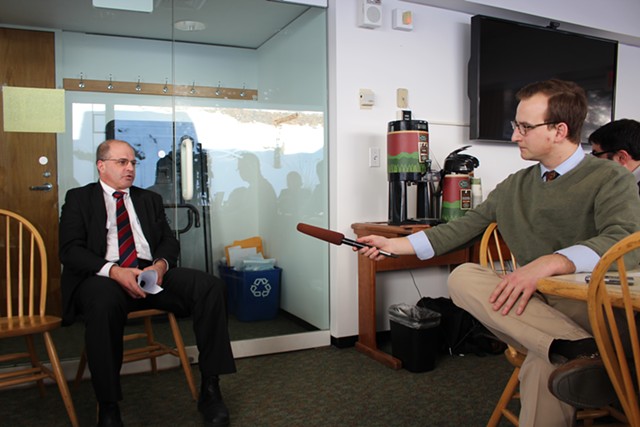 He said he had previously "taken a high-level look" at the option they proposed, when the state was looking to dump CGI last year. At that time, he said, "there was no particular evidence that it would be more successful" than the state-based system. That has since changed, Miller added.

"At this point in time, you've seen other states — you've actually seen it come to fruition," he said. "So it's important to go back again and look at that. Any recommendations somebody has for me we're looking at seriously. Because this current situation is not good."

"I think that it's worth looking at different options that are available," he said. "Clearly, the state exchange that we have now is going better, but it's not functioning at the level we would like it to. If there are other ways to get to the same place and retain our ability to provide state subsidies and integrate it with other systems we have, then I'm all ears."