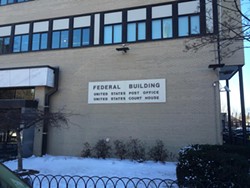 Prosecutors this morning began their final day of presenting evidence against a Burlington man charged with concealing his involvement in a rape and two murders in Bosnia when he applied for U.S. citizenship.

Prosecutors played video testimony from another Bosnian who claims to have witnessed a kidnapping and two murders in 1992, when brutal ethnic fighting roiled Bosnia. Authorities say that Edin Sakoc, who settled in Vermont more than a decade ago, and a fellow soldier identified only as "Boban" stormed a home where a family was sheltering three Serbian women.

The men kidnapped a woman whom Sakoc later raped, prosecutors allege, and then Boban fatally shot the other two women.

Nilokina Ljubic, who lived with her parents in the home, recalled that Boban was more aggressive, while Sakoc consoled her.

"[Sakoc] tried to calm the other guy down all the time," Ljubic said in testimony that was recorded in Bosnia last year and played for jurors in U.S. District Court this morning.

"In my opinion [Sakoc] prevented him from threatening me," she testified.

Sakoc even tried to assure her that he would, one day when the conflict was over, visit the hair salon she owned, she said.

But he did nothing to stop Boban from shooting the two women, and helped Boban carry the corpses outside and light them on fire, Ljubic said. As the bodies burned, Ljubic said, Boban danced around them, tossing twigs into the flames and singing, "Burn, burn."

Meanwhile, she said, Sakoc came back to the house and watched the spectacle alongside her.