Ahead of Democratic Fundraiser, Republicans Seek to Limit Lobbyist Donations | Off Message

Ahead of Democratic Fundraiser, Republicans Seek to Limit Lobbyist Donations 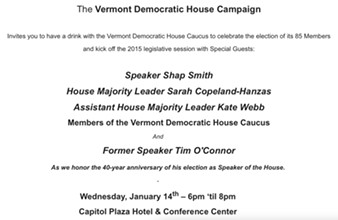 House Speaker Shap Smith (D-Morristown) and other top Democrats plan to schmooze with lobbyists Wednesday night at a Montpelier fundraiser to benefit the political action committee they run.

Individual legislators are currently barred from raising money from registered lobbyists and the companies that employ them until after the legislature adjourns at the end of the two-year biennium. But Vermont Democrats and Republicans alike have long exploited a loophole allowing them to raise lobbyist cash through the PACs they control — even while the legislature is in session. Those PACs then spend the money on electoral activities.

Reps. Kurt Wright (R-Burlington) and Patti Komline (R-Dorset) say they plan to introduce legislation later this week that would extend the restrictions to political parties and PACs.

"We think that practice ought to be banned," Wright says.

The two Republicans say they were inspired to act last April when Smith and his fellow House Democrats invited lobbyists to a $500-a-head fundraiser just days before the legislature adjourned. Komline says the timing of that fundraiser — as legislators finished work on the budget and tax bills — "gave the appearance of pay-to-play."

"That's when we realized it was egregious," she says.

Adds Wright, "I don't think there should be any hint even that somebody writes a $500 check or $1,000 check or whatever it is and they get some special consideration here in the closing days of the session — or at any time during the session."

As we reported in this week's Fair Game, the Vermont Democratic House Campaign, a political action committee run by Smith and other top Democrats, is scheduled to host a "Speaker's Soiree" Wednesday night at Montpelier's Capitol Plaza.

House Speaker Shap Smith declined to comment Wednesday on Wright's and Komline's legislation. But in an interview with Seven Days on Monday, he defended taking part in the Speaker's Soiree.

“I would prefer that we are not raising money at any time during the legislative session," Smith said. "This is within the rules, and it's historical practice that has been going on for a really long time."

Komline herself has previously served as House minority leader. She says the House Republican PACs, too, have raised money from lobbyists during the session.

"We're not holier than thou on this," she says.

"You can't be weighing in on legal and policy decisions as you're asking people for money. I think most people understand that's a bad idea and could potentially very directly lead to corruption," Pearson says.