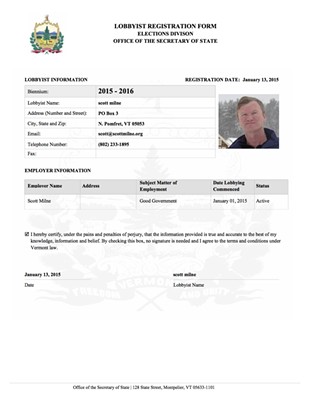 Five days after falling short in persuading legislators to elect him governor, Scott Milne registered as a lobbyist Tuesday, an unusual move state officials ruled he needed to make at the close of an equally unusual campaign.

Milne says he paid $325, including a $250 late fee, to register as a lobbyist this week. The filing is retroactive to January 2, Milne says, because that’s when he posted an online video in the hopes of persuading lawmakers to vote for him, putting him over $500 in spending.

Milne, a Republican business owner who has never held elected office, came 2,434 votes short of defeating two-term incumbent Democrat Peter Shumlin in November. Because no candidate won more than 50 percent of the vote, the election went to the legislature, which voted last Thursday 110-69 for Shumlin. Leading up to the vote, Milne urged Vermonters to call on their legislators to support for him if they were unhappy with the direction of the state.

That action qualifies as lobbying, according to Assistant Attorney General Michael Duane. Lobbyists who spend $500 or more on their efforts are required to register with the secretary of state’s office, he says.

Milne says he was surprised to learn earlier this month that traditional election rules were no longer germane and that what he was doing was lobbying, not campaigning. But he chose not to fight the ruling.

“The election turned out to be a one-in-150-year event that wasn’t taken into account in the state’s campaign finance laws,” Milne says.

According to Milne, he was late in filing because, “I just didn’t get around to it. I don’t have anybody to delegate it to anymore.”