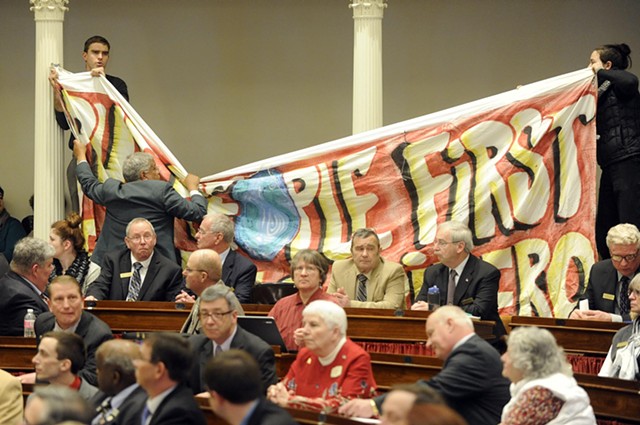 The protest, which began with singing and chanting in the halls of the Statehouse, escalated over the course of the two-hour ceremony. After one activist burst onto the balcony of the House chamber, Barre Mayor Thom Lauzon grabbed and attempted to forcibly remove him. 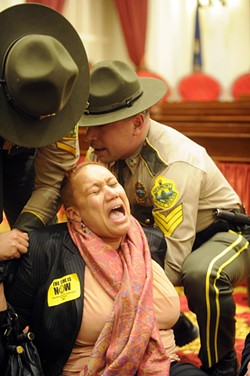 The mass disruption culminated with a sit-in staged in the well of the House.

Between 8 and 9 p.m., the Vermont State Police removed the protesters one by one, arresting 29 and charging them with unlawful trespass. Of those, at least seven were also charged with resisting arrest, according to VSP Lt. Garry Scott.

State troopers lifted up several protesters who refused to comply with their instructions to leave the Statehouse, dragging them down the center aisle of the House and out of the chamber. One of them, Sheila Linton of Brattleboro, cried out in apparent pain as two troopers pulled her arms behind her back.

The troopers appeared to pull Linton’s arms further behind her back, prompting her to shriek. They then lifted her to her feet and escorted her from the chamber. According to protest organizers, Linton was subsequently taken to the hospital.

The arrests marked the end of a highly unusual day at the Vermont Statehouse, during which Shumlin was elected to a third term by a secret vote of the legislature.

An hour before his inauguration was set to begin, at least 250 activists lined the halls of the Statehouse and assembled near the entrances to the House chamber. They sang and held up yellow pieces of paper that read, “The time is now,” as Shumlin and his fellow dignitaries walked to the House floor. Even after the formal ceremony began, their voices could be heard from the gallery, occasionally interrupting the proceedings.

As Shumlin prepared to take the oath of office, two activists unfurled a large banner under the House balcony that read, “Put People First,” in English and Spanish. Another entered the chamber from the right of the dais, loudly declaring her support for single-payer.

Shumlin stood passively, his hands folded in front of him.

After the he delivered his inaugural remarks, protesters hoisted a second banner that read, “The Time is NOW,” featuring a Vermont Workers’ Center logo. Others streamed into the chamber and sat down in the center aisle, blocking Shumlin’s path and that of his fellow lawmakers.

In a round of call-and-response, they chanted that they would not move until Smith scheduled a public hearing by January 29 on how to finance single-payer health care.

“When I think of what other countries do to silence the differences, aren’t you glad you’re in America?” Potter asked the crowd, prompting an extended, standing ovation. “As long as they’re quiet when I pray.”

As Potter spoke, Ki Walker of Royalton burst onto the balcony, drowning out the benediction as he sang along with the crowd outside.

“Strange things have happened here, no stranger would it be,” Walker and his fellow protesters sang to the tune of “The Hanging Tree,” a song featured in The Hunger Games trilogy. “Health care is a human right, a right for you and me.”

“Don’t worry. I’ve got the mic. I can out-shout them,” Potter joked to the crowd.

Lauzon, who was seated nearby, rose from his seat, put his arms around Walker and unsuccessfully attempted to push him out of the House chamber. Rutland Mayor Chris Louras then stood up and joined the Barre mayor in the entranceway, blocking other protesters from entering.

“You and me, we’ll take care of it,” Louras told Lauzon.

In a subsequent interview, the Barre mayor at first denied that he had pushed Walker, saying, “I was just standing,” but later conceded the point.

“You’ll have to get the film,” Lauzon said.

His fellow enforcer, Mayor Louras, denied his own role in the incident.

Walker remembered it differently, saying Lauzon “had his hands all over me.”

“Our tone was, like, nice or whatever,” Walker said. “We were singing. We were singing songs … Folks were trying to come in and [the mayors] were forcibly, like, blocking them, and I was already in there and they tried to grab me and forcibly remove me.”

As the disruption continued, Public Safety Commissioner Keith Flynn approached the protesters seated in the aisle, but they declined to move. So instead of processing through the front of the House when the ceremony concluded, Shumlin ducked out of the chamber through a rear exit.

State police troopers then cordoned off half of the second floor of the Statehouse. One trooper refused to allow Chief of Health Care Reform Lawrence Miller to enter the governor’s ceremonial office until Miller exasperatedly explained that he was a senior adviser to Shumlin.

The governor’s spokesman, Scott Coriell, said his boss had returned to his office in the Pavilion State Office Building and would not make himself available for comment.

Vermont Workers’ Center executive director James Haslam said he was pleased with the way most of the protest unfolded.

“I don’t think everything went down as some sort of completely organized process, but the goal was not to be anything but peaceful and civil, but to make their voices heard,” he said.

Some legislators, however, took issue with their tactics.

“It was disruptive to a person who has probably spent more years working on the issues that they’re interested in and pursuing than they are old,” she said, referring to Shumlin. “Here’s a person who has spent his lifetime devoted to those issues in one way or another. To show that kind of disrespect, I think, was not right.”

Others, including Sen. Claire Ayer (D-Addison), said the protesters had failed to do their due diligence before disrupting the inauguration. She said the Senate Health and Welfare Committee, which she chairs, had already scheduled hearings on single-payer financing.

“I would say that, unfortunately, they were misinformed,” Ayer said. “They went there thinking they had been shut down and denied something, but for some reason they never asked. James Haslam never called me about it.”

Smith, who has ruled out passing a single-payer financing plan this session, echoed Ayer’s point.

“I know that the committees of jurisdiction are planning on taking testimony soon about the report that was put forth by the administration, and I expect them to do that in the next couple weeks, and I expected them to do that before the protests happened today,” the speaker said.

Referring to the Workers' Center as “pretty militant,” he said House leaders had “always shown ourselves to be receptive to having input from the public, and I do think that it didn’t need a protest for input to happen.”

At the end of the night, after all 29 arrestees had been booked and processed, the health care protesters gathered outside the Statehouse’s east entrance to celebrate, debrief and arrange rides home. At least four of them were smoking.

“Does anyone have a cigarette?” another asked upon joining the crowd.