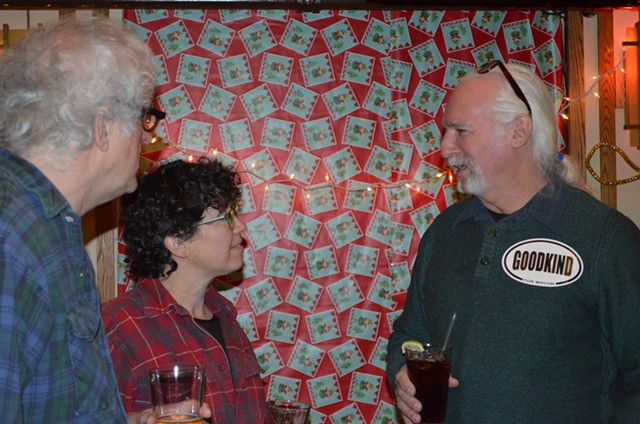 Steve Goodkind, the Progressive candidate for Burlington mayor, officially kicked off his campaign Thursday in a private room at Three Needs Bar. Leaning against a pool table, he launched into an extemporaneous speech to the roughly 30 supporters who showed up.

The former public works director, who spent 32 years working in city government before stepping down in 2013, described his platform, which is based on five concepts. Specific proposals, he said, will come later in the campaign.

The first is to focus on promoting neighborhoods, something he said city government has strayed from, without elaborating. The second is to reorganize city government  — which he described as pretty creaky and archaic — possibly by consolidating departments. Goodkind helped orchestrate the consolidation of multiple departments into what's now the department of public works when Bernie Sanders was mayor. Goodkind's third concept is to pursue development more cautiously. In particular, he said, he'd advocate more forcefully for preserving rather than developing the land behind Burlington College.

When discussing his fourth guiding principle — looking out for the taxpayer — Goodkind criticized the current mayor, Democrat Miro Weinberger, saying, "this administration appears to be a little tone-deaf to that." He cited roughly $300,000 owed to the city as a result of chronic overbilling by the Burlington Electric Department, which Weinberger did not attempt to recoup, citing a statute of limitations in state law. And he said Weinberger hasn't done enough to attempt to recoup the $17 million of taxpayers' dollars diverted to keep Burlington Telecom afloat when Bob Kiss was mayor.

Goodkind's final priority is transparency — something Weinberger has also emphasized. Goodkind criticized the current mayor for running a tightly controlled administration that presents things to the public in an overly scripted manner. If elected, he said, he wouldn't use a spokesperson and wouldn't allow department heads to either.

People at the event referred derisively to Weinberger as the "developer-in-chief" — a term Goodkind has also adopted.

Brian Goblik, who is part of a group of residents organizing under the banner Save the Burlington College Land, said he thinks the mayor has lived up to his promises to restore the city's financial health, but now "it's time for the baton to be passed." Going forward, Goodkind's more skeptical approach to development better suits the city, Goblik said.

Melissa Cox, who first met Goodkind at Three Needs, said she's a Democrat and thinks Weinberger has done a decent job, but she's impressed with Goodkind's long stint in public service. And, she added, "He's so open and gregarious. He'd be a great personality to have in office."

The candidate arrived 17 minutes late to his own event, after attending the first of a series of public meetings about the proposed redevelopment of the Burlington Town Center. He said he's keeping an open mind about the project. Wearing his signature fur hat and Carhartt jacket and pants, he said he began the campaign assuming that Weinberger was invincible. But now, he said, "I believe without a doubt this is winnable."