With the bang of a gavel Wednesday morning, the Vermont legislature launched its most anticipated session in years.

The day of ceremony featured few surprises. Leaders of both chambers — House Speaker Shap Smith (D-Morristown) and Senate President Pro Tem John Campbell (D-Windsor) — won unanimous reelection to their posts. Smith formally announced an overhaul of his committee leadership team that he has been planning and telegraphing for months.

Even as Vermont’s newest class of legislators enjoyed the pomp and circumstance of opening day, many appeared preoccupied by the next day’s business: the unusual election and inauguration of a governor whose identity is not yet known.

Because no candidate cleared the constitutional threshold of 50 percent in the November election, lawmakers will be called upon to select a governor Thursday morning from among the top three vote-getters: incumbent Democrat Peter Shumlin, Republican Scott Milne and Libertarian Dan Feliciano.

Shumlin, who won a bare plurality last fall, appeared in the Statehouse intermittently throughout the day, while Milne roamed the halls, shaking hands with those who approached him. 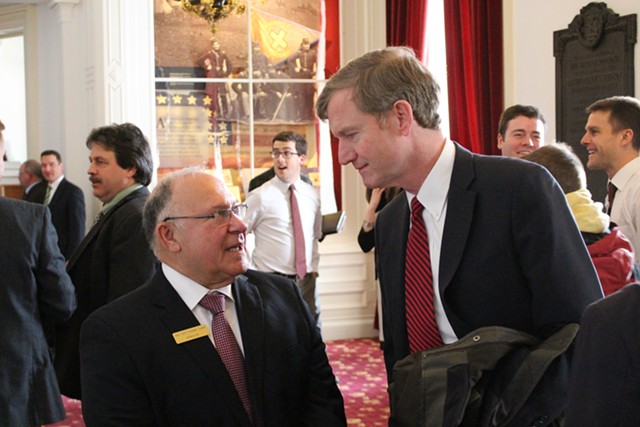 The Pomfret Republican said he had come to the Statehouse primarily to watch his father, Don Milne, take the oath of office as clerk of the House. The younger Milne said he had done so on the first day of every biennium since the early 1990s.

“It’s funny. I’m a little more noticed this year than I usually am,” he joked. “It’s a great family day for us. I’m here for that, and I got a little side act going on this year, as you know, which makes it a little more complicated or interesting, perhaps, than usual.”

While the atmosphere in the Statehouse was mostly festive, legislative leaders acknowledged that the coming session would be tougher than most. Chief among the challenges they face: bridging a projected $100 million budget gap.

In separate remarks, Smith and his Republican counterpart, Rep. Don Turner (R-Milton), highlighted many of the same issues as priorities for their respective caucuses, though their approaches will surely differ. Both pledged to rein in the costs of education and health care, find efficiencies in state government, clean up Lake Champlain and make the state a more affordable place to live.

“We all heard this fall a growing uneasiness amongst our friends and families who are Vermonters and our neighbors,” Smith said in his opening remarks to his House colleagues. “They hear about rising stock prices, increased economic growth and low unemployment rates, but many of them do not feel the impact in their own pocketbook. Too many of our neighbors feel pinched — plain and simple.”

Most troubling of all, Smith said, “is that workers and businesses are uncertain about what the future holds and neither are sure whether they are being heard here in the people’s House.”

Given Shumlin’s diminished political standing after a bruising election season and his abandonment last month of his long-sought quest for single-payer, many speculated Wednesday about whether he would run again in two years.

They noted that Smith’s unusually personal and passionate speech sounded more like that of a gubernatorial candidate than a House speaker — and that Republican Lt. Gov. Phil Scott, another top prospect, was hosting a business “pitch session” Wednesday afternoon at the Capitol Plaza hotel. Earlier Wednesday, the Senate once again appointed veteran Sen. Dick Mazza (D-Grand Isle) to join Campbell and Scott on the three-member Committee on Committees. That group will decide in the coming days who will serve on and lead the Senate’s committees.

Smith, who has sole discretion to dole out committee assignments to House members, shuffled the leadership of several top panels.

(Read more about several of the new chairs in this week’s Seven Days and see a full list of committee assignments here.)