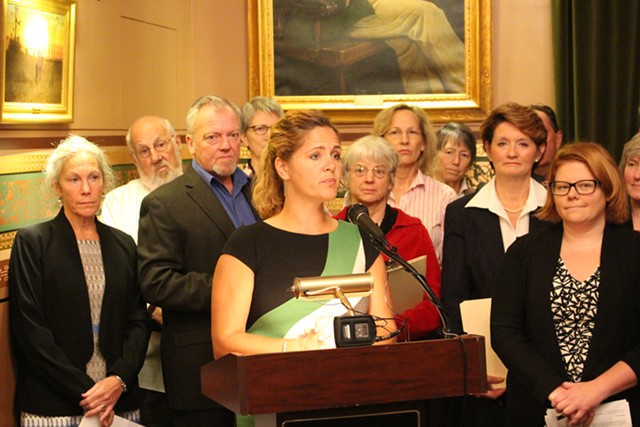 Races for two House Democratic leadership positions have been settled ahead of this weekend's caucus.

“I am honored to be chosen by my House colleagues to help lead us through this next biennium,” Copeland Hanzas says. “I’m humbled by that support, but also energized to help ensure that we are communicating together not only across the wide range of ideas from within our caucus, but with independents, Republicans and Progressives in the House to do good work for Vermonters.”

The five-term legislator has spent the past month competing with Rep. Kesha Ram (D-Burlington) for the House's No. 2 post. Ram informed her colleagues by email Tuesday evening that she'd dropped out of the race. Instead, she'll seek to become "caucus election chair," a position House Dems expect to create during their organizational meeting on Saturday.

Ram called the contest "a very close race," which she left "on [her] own terms."

"I was becoming increasingly sensitive to the number of people from Chittenden County in the race for other leadership positions," she explains.

According to Ram, the new caucus election chair position is intended to provide support for members well before the campaign season heats up.

"As I traveled around the state, I heard from many members of their deep desire for better messaging tools, more incumbent support and for us to build a really robust strategy for 2016," she says. "I think, especially with what we're about to face in terms of these major priorities and initiatives on the policy side, this work could really use a dedicated focus."

House Speaker Shap Smith (D-Morristown) says that, even before House Democrats suffered losses in last month’s elections, he was considering creating such a position.

"There have been discussions over the last couple cycles about whether we're asking too much of the majority leader and the whip, who are really internally focused during the session, and whether we needed someone who's externally focused who could help us out through the cycle," he says.

Born in Illinois, Copeland Hanzas grew up in the Upper Valley and attended public schools in Corinth and Bradford. After graduating from the University of Vermont and attaining a teacher’s certificate, she taught middle and high school science at Oxbow Union High School in Bradford.

"She has a good understanding of things that concern Vermonters, as somebody who grew up in Vermont and has lived both inside and outside Chittenden County," Smith says. "She's very smart and personable and tough, and I think she'll do a good job."

Copeland Hanzas says her experience in education, manufacturing and the wood products industry will inform her work in House leadership. She says that, in the wake of last month’s election, caucus members have instructed leadership to focus on “property taxes, health care and jobs and the economy” — in that order.

“I think we’re more likely to hit a home run on jobs and the economy than health care and property taxes, just because those are very complicated issues that are going to be very tightly watched from all sides,” she says.

The race for majority whip, the No. 3 position, has also been settled. Rep. Sam Young (D-Glover) briefly challenged Rep. Kate Webb (D-Shelburne), but has since dropped out. Webb was first elected whip last spring after former representative Tess Taylor resigned her seat to run a single-payer advocacy group.