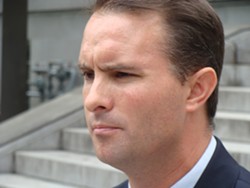 In total, Donovan has dropped five cases this week as a result of the arrest of Colchester Detective Cpl. Tyler Kinney, who faces federal charges for allegedly stealing a gun and drugs from the evidence locker to support his heroin habit.

And there will likely be many more cases dismissed in the next several weeks, Donovan said. He declined to give an estimate.

"It hurts public safety, there's no doubt about it," Donovan said. "The community suffers. There is a real consequence to his alleged behavior."

In each case, Donovan said, seized drugs are missing and presumably were taken by Kinney. The cases were dropped before defense attorneys filed motions, which Donovan says were inevitable, challenging the evidence. "There's no physical evidence. It's gone," Donovan said. "The charge is possessing  drugs, and if you can't produce the drugs, how can you proceed?"

The announcement comes a day after Donovan's office dropped cases against two alleged heroin dealers for the same reason.

Donovan's office is awaiting a report from the Federal Bureau of Investigation, which is conducting a full audit of the Colchester police evidence room. Drug cases may not be the only ones in jeopardy.

In other cases that rely on evidence stored there, lawyers could argue the evidence was unreliable and potentially tainted. And cases in which Kinney was an investigator could also be in trouble, Donovan said, as attorneys could attack his credibility.

Donovan said he is obligated to abandon charges if they rely on evidence that can't hold up in court. "Our mission, our job is to seek justice, not to get convictions," Donovan said. "It's about the integrity of the system. The government, all of us, this one is on us. We own it."

Kinney is currently receiving in-patient treatment in Serenity House in Wallingford while his case is pending.