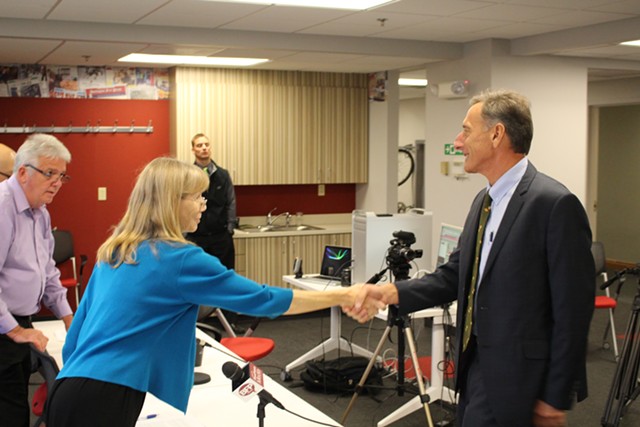 As it expands its coverage of Vermont government and politics, Seven Days has hired veteran Statehouse reporters Terri Hallenbeck and Nancy Remsen.

"Our readers want to know what's happening in Montpelier," says publisher and coeditor Paula Routly. "They want to know how decisions are made, who's making them and why."

Hallenbeck and Remsen spent the last decade running the Burlington Free Press' capital bureau. Both announced they were leaving the paper on Election Day, after they were taken off their longtime beats and reassigned.

A University of Vermont graduate, Hallenbeck spent 11 years at the Daily Star in Oneonta, N.Y., before returning to the Green Mountain State in 1998 to work for the Free Press. She served as copy editor and assistant metro editor before joining the paper's capital bureau in 2005.

At Seven Days, Hallenbeck will serve as a full-time staff writer, covering the Statehouse and occasionally writing the Fair Game political column.

"I’m thrilled to be back writing about the legislature and state politics and grateful that Seven Days sees the value in experienced coverage," she says. "We’re coming off an unexpectedly close governor’s race that’s still technically unsettled. Next year promises plenty of intrigue in Montpelier. I’m looking forward to delving into it for Vermonters."


A Middlebury graduate, Remsen spent 20 years at Maine's Bangor Daily News. There, she worked her way up from general assignment reporter to managing editor. Remsen joined the Free Press as assistant metro editor in 1996 and began reporting from the Statehouse the following year.

She will cover health care and medicine at Seven Days in a part-time capacity. She also plans to serve as a special correspondent for WCAX-TV, also part-time.

"Although I have been a reporter for 40 years, I wasn't ready to put down my pen and notebook when my gig with the Free Press ended abruptly," Remsen says. "Seven Days and other Vermont media are giving me opportunities to stay in journalism. Thank you. I especially welcome the challenge Seven Days has offered to cover one of the most important issues of the day — health care."

According to WCAX news director Anson Tebbetts, Remsen will report on "in-depth" policy matters for the station.

"WCAX is lucky to have Nancy joining our newsroom," he says. "Her wealth of knowledge and experience will help us tell stories from the Statehouse to the back roads of Vermont."

Hallenbeck's and Remsen's departures from the Free Press came as the daily underwent a vast reorganization and downsizing at the behest of Gannett Company, its Virginia-based owner. Throughout the country, many Gannett properties have shed newsroom staff in recent months and forced employees to apply for new jobs with different titles and responsibilities.

The Free Press has said it plans to replace Fogler, and it recently posted advertisements for two reporting positions.

These changes have come as the paper has continued to lose readers. Five years ago, the Free Press distributed 33,489 copies on weekdays and 42,180 on Sundays, according to data compiled by the Alliance for Audited Media. By this fall, weekday circulation had dropped to 24,194 and weekend circ to 28,914 — and that's including digital editions. These days, the Free Press distributes just 20,780 hard copies on weekdays and 27,143 on weekends.

It's unclear precisely how the paper plans to cover the Statehouse during the approaching legislative session. Earlier this month, executive editor Mike Townsend penned a note to readers to "correct misinformation swirling around on social media" about the reorganization.

"The rumors and speculation that we are abandoning coverage in Montpelier are dead wrong," he wrote. "Of course we will continue to cover the Statehouse. Period."

Townsend did not elaborate.

According to Routly, Seven Days is moving to fill the void left by the Free Press and other embattled news organizations.

“As the media landscape continues to shift, we’re seeing opportunities where we can step up, increase our coverage and continue to provide something different from everyone else,” she says.

Founded in 1995, Seven Days has grown from six to 60 full- and part-time employees, including 22 editorial staffers. Last year, the paper increased its circulation from 35,000 to 36,000 and expanded its distribution in the Northeast Kingdom.

Routly calls it a "coup" that the company picked up two of the Statehouse's top political reporters.

“Terri and Nancy bring an unusual combination of experience and knowledge," she says. "They’ll really hit the ground running."

As part of the expansion, Routly has named me political editor. As such, I'll supervise Seven Days' Statehouse coverage, while continuing to write Fair Game most weeks.