Adjuncts at Burlington and Champlain Colleges Vote to Unionize | Off Message

Adjuncts at Burlington and Champlain Colleges Vote to Unionize 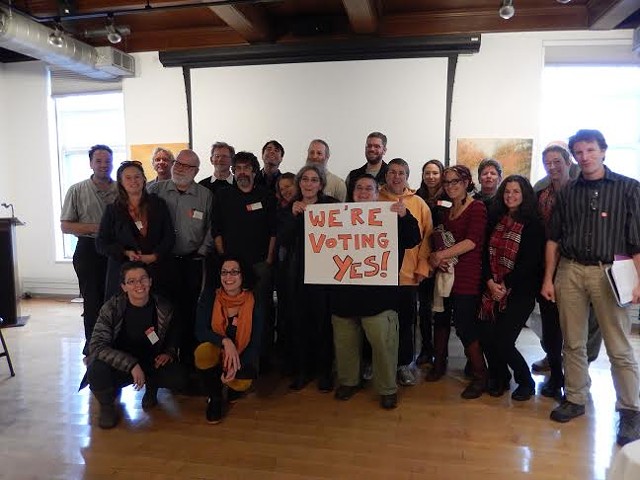 Faculty — some of whom rely on public assistance — cite low pay and a lack of benefits and job stability as their major complaints. Seven Days recently wrote about working conditions for these professors and SEIU's effort to organize them.

An election is also being held for adjuncts at St. Michael's College. The results will be tallied next week.

Champlain College has 219 adjunct professors, 176 of whom voted in an election held by the National Labor Relations Board. Of that group, 118 faculty members, voted in favor of joining SEIU.


In a statement announcing the results, the college's president, Donald Laackman, pledged that the administration would "do its part to work productively with the SEIU." Before the vote, the administration expressed concerns about the unionization effort on its website, writing, "If the union wins a majority of adjunct faculty votes, we will be forced to use a negotiation process that is, by its very nature, homogenizing and procedure-driven, as opposed to a collegial forum for envisioning and implementing change together."

Champlain adjunct Betsy Allen-Pennebaker, who attended the vote count in Boston, was considerably more upbeat. In a statement, she said, “I think that this victory today is a wonderful thing for adjuncts, not only in terms of pay and job security, but also in how we feel about ourselves and our profession ... I really believe that this union is a win-win for everyone. What’s good for adjuncts will also be good for Champlain College as an institution – and improving adjuncts’ working conditions is going to create an even better classroom experience for our students.”

At Burlington College, 27 professors voted, and 23 opted to unionize. Interim college president Mike Smith was not immediately available to comment.

SEIU has notched a number of successes recently when it comes to organizing adjuncts. According to a press release issued Monday, it represents 22,000 faculty. Professors at roughly 12 schools have joined their ranks within the last year.  The release states that in Vermont, more than 40 percent of faculty at private, non-profit colleges are part-time.