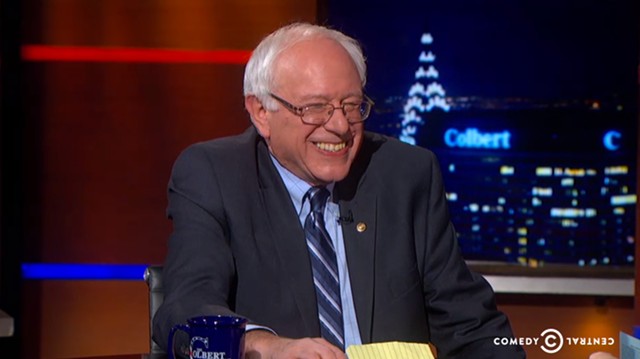 In an appearance on Comedy Central's "The Colbert Report" Monday night, Sen. Bernie Sanders (I-Vt.) achieved the impossible: He looked like he was having a good time.

Sanders, who typically vacillates between stiffness and anger, ably parried with faux-conservative host Stephen Colbert over socialism, Denmark and even Sanders' status in Vermont's congressional delegation.

"No, he's doing just fine," Sanders said with a laugh. "He and I are pretty good friends."

"But compared to you, he's like Rush Limbaugh. He is so right-wing," Colbert said. "He's a Democrat. You're a socialist. That's the bogeyman of Washington. Do you frighten people when you walk around the Capitol? Are they afraid you're going to take their tractor and give it to the whole village?"

Colbert, who is nearing the end of his nine-year run on the "Report" before taking over CBS' "Late Show" from David Letterman, urged Sanders to say whether he'll run for president in 2016. The audience — some of whose members chanted, "Bernie, Bernie, Bernie" — seemed to think he should.

"They love you cuz you're on my show," Colbert said. "Would you like to make some news?

"Well, the news is that I am thinking about running for president," Sanders said.