Steve Goodkind to Run for Burlington Mayor | Off Message 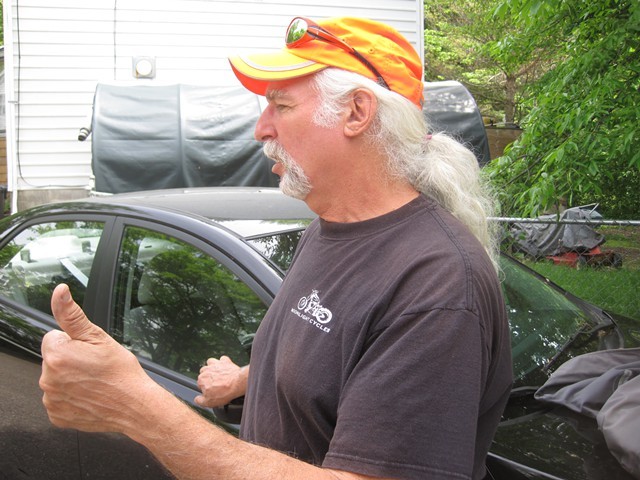 Reached Monday afternoon at Moonlight Cycles, his son's Winooski motorcycle shop, Goodkind said he's been wanting to get involved with city affairs again and he's determined that "now is the time." (In September, Weinberger said he would run for a second term.) The election takes place next March.

A resident of the New North End, Goodkind has ties with Queen City Progressives, but he hasn't decided whether he'll seek a party nomination or run as an independent. Asked how likely it was that he'll run as a P, Goodkind said, "There is some interest there, so I will look at that option." Currently, he is gathering the 150 signatures from registered voters that he'll need to get on the ballot. "I’m hearing a lot of people say, 'Do it.'"

When Bernie Sanders announced his mayoral bid in 1981, he did so from Goodkind's living room. The pair had met when Goodkind repaired Sanders' Volkswagen. After winning, Sanders installed Goodkind as the director of public health and safety. He stayed long after the Socialist mayor, serving under the next four mayors — most recently, Weinberger.

After a stint as the city engineer (Goodkind has an engineering degree from the University of Vermont), he became the public works director in 1998. He's identified the installation of a $52 million stormwater system (when Sanders was mayor) as one of his major accomplishments. In a letter announcing his retirement from that post in May 2013, Goodkind wrote, "In a very positive way, this job has been all-consuming, and I do have other dreams and plans. I have reached the point where I am in the financial position and still young enough to pursue them. It’s time to pass the torch."

Since then, Goodkind has gotten involved in the effort to preserve local ownership of Burlington Telecom, which he said helped pique his interest in running for mayor.

At this point, Goodkind declined to critique Weinberger's tenure, saying only that Burlington is at a turning point, and, "I will give people some choices that they haven’t had in a while in Burlington."  When Seven Days' Kevin Kelley asked him about the current mayor's chops in May 2013, the outgoing public works director described Weinberger as "on a learning curve" but complimented him for surrounding himself with capable people.

As for his qualifications? "I know a lot about what goes on in the city," said Goodkind, citing his three decades of experience. He acknowledged that his bid will be a "long shot," but said he plans to run a bold campaign that won't involve "pandering" or "playing coy." He said, "I’m not going to be so cautious."

In a brief interview before a city council meeting Monday evening, Weinberger praised his newly declared opponent. "Certainly Steve has been a dedicated public servant for a long time, and I appreciate that he wants to continue to serve and I welcome him into the race and look forward to a spirited campaign."

Asked where he might differ from Goodkind, the mayor continued, "It has seemed to me that he’s been opposed to the way that we are moving forward with the resolution of Burlington Telecom so if that’s something he continues to advocate for I think that will be a clear distinction between us. Beyond that, at this point, you know, it’s tough for me to assess."