Vermont Gubernatorial Race Too Close to Call | Off Message

by Paul Heintz and Mark Davis 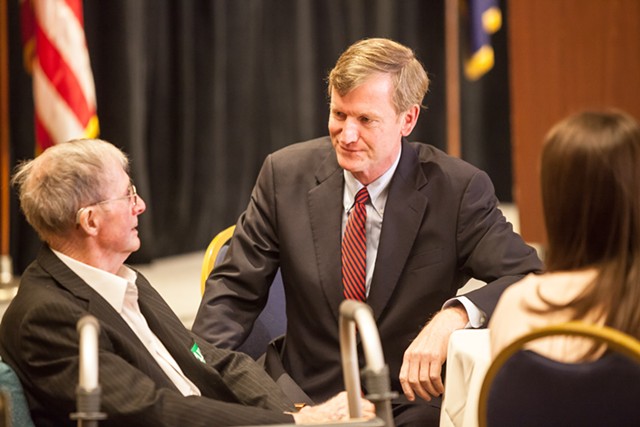 In a remarkable turn of events, Democratic Gov. Peter Shumlin and Republican challenger Scott Milne called it a night Tuesday without either candidate declaring victory or defeat.

Shumlin appeared in the Adirondack Ballroom at Burlington’s Hilton Hotel at 11:15 p.m. to tell supporters they would have to wait until Wednesday to know for sure who won.

“I feel very good about where we are right now,” Shumlin continued. “And we’re going to let the votes be counted, get some sleep and come back tomorrow with all the votes in and continue to move forward.”

Twenty minutes earlier, Milne told Republicans gathered at Burlington’s Sheraton Hotel that his message, “to slow down a little bit on being the most radical progressive state in the country every day,” had resonated with Vermonters.

He acknowledged that “it looks likely that we might end up on the short side here tonight,” but he did not concede the race.

Whatever the final result, the race is now in the hands of the legislature — since neither candidate could plausibly reach 50 percent of the vote.

A few factors worked to his advantage: Republicans struggled to recruit a strong candidate to run against him, while Progressives chose to sit out the race. Shumlin had a hefty campaign war chest at his disposal and, as an incumbent, was able to keep in the public eye while hoarding those resources for the final sprint.

Most importantly, Shumlin benefited from a split in the opposition between Republican nominee Scott Milne and Libertarian Dan Feliciano — and from both candidates’ inability to catch fire. That split may have saved his political career.

Milne, a Pomfret businessman and political novice, filed his candidacy at the very last minute and took his time getting his campaign off the ground. After Milne introduced himself as a moderate who was willing to consider single-payer, conservative Republicans rallied behind Feliciano, a management consultant from Essex. Feliciano failed to overtake Milne as a write-in candidate in the GOP primary, but he continued to hit the Republican throughout the general election.

Shumlin spent much of the campaign trumpeting his support for renewable energy jobs, mandatory labeling of food containing genetically modified ingredients and increasing access to education. Milne mostly focused on criticizing Shumlin’s health care agenda as “radical” and “reckless” and questioning how much time the governor spent out of state. Feliciano pledged to stop single-payer in its tracks, lower taxes and expand school choice.