Media Note: Reporting the Personal Side of Politics | Off Message

Media Note: Reporting the Personal Side of Politics 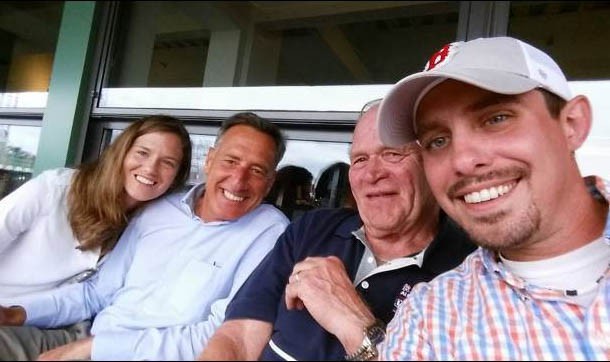 In a 4,600-word profile of Gov. Peter Shumlin published Thursday on VTDigger.org, reporter and editor Anne Galloway makes some familiar points about the second-term Democrat: He’s a skilled politician with big ambitions. He’s alienated many legislators and voters. In single-payer health care reform, his biggest challenge lies ahead.

But buried 4,400 words into the story is a sliver of information that’s never been reported and isn’t widely known outside Montpelier: For the past several years, the 58-year-old governor has been dating Katie Hunt, a 30-year-old Mount Holyoke College undergraduate.

So is that news? Well, it certainly isn’t new.

The couple has been seen around town for years. More recently, Hunt has accompanied the governor to public political events, such as the Vermont Democratic Party’s Curtis Awards Dinner in June and WPTZ-TV’s gubernatorial debate last Wednesday.

According to Galloway, Hunt attended Shumlin’s state of the state and budget addresses this year. But she hasn’t been a fixture at state events, and neither the governor nor his staff has officially acknowledged the relationship. When President Obama invited Shumlin to a state dinner last February honoring French president Francois Hollande, his date was Sarah Schmidt, a political supporter who runs the Lesbian Political Action Committee.

In most states, the media would have reported the existence of the relationship and picked over its every detail years ago. But here in genteel Vermont, the press has long treated personal matters as strictly off limits — much like the national political media, pre-Gary Hart.

“I think we have a better sense in Vermont,” says Garrison Nelson, a veteran political scientist at the University of Vermont. “We prioritize policy and not personal skullduggery. It’s tabloid stuff. And Vermont has been relatively free of tabloid stuff.”

Case in point: It took a national news organization, BuzzFeed, to first report in April 2013 that Shumlin and his wife of 23 years, Deborah Holway, had divorced the previous month after years of separation.

The way Galloway sees it, Vermont’s news media have gone too far in shielding the state’s chief executive from scrutiny.

"I think we've been overly protective," she says. "I think Vermonters need that information. I mean, this is the guy in the top office of Vermont, and we don't know who he's with most of the time."

Two years ago, Galloway publicly queried the governor about his domestic arrangements as he faced questions about a land deal involving three friends and campaign contributors.

“Who’s going to be living there with you?” Galloway asked at an October 2012 press conference, referring to the house Shumlin had built on the land in question. “Two thousand two hundred square feet. It’s a big house.”

The governor ignored the question at first, but returned to it later.

“I think when I said a minute ago that my private life is just that, my private life, and I intend to keep it that way,” he said. “I’m happy to talk to you about any areas of my life that have to do with my job as governor, but that’s not one of them.”

That same month, Galloway pressed him more directly during an editorial board meeting at VTDigger’s offices.

“I asked him at the end of [the meeting] if he had a girlfriend and who she was,” Galloway recalls. “I’d heard he had a girlfriend. He said he didn’t want to talk about it. It was private business … He wasn’t too happy and he left.”

“Gov. Shumlin appreciates Vermont’s long tradition of respecting the privacy of governors’ personal lives and their families,” spokeswoman Sue Allen said in a written response to Seven Days’ questions about the piece. “He will have no comment on the VTDigger story.”

Galloway thinks the relationship is fair game for two reasons: One, Shumlin and Hunt have chosen to appear together at public events. Two, according to an anonymous source Galloway quotes in her profile, Shumlin seeks Hunt’s advice on “everything” — including state business.

“When companions of political officials go to official events, that means that on some level they’re present and involved — maybe not directly involved, but they are involved,” Galloway says. “Now it seems really clear that Katie is someone he turns to for advice, and that makes it a matter of public interest.”

Furthermore, Galloway argues, without knowing Hunt’s identity, it’s impossible to evaluate whether her relationship with the governor poses a conflict.

“What if she had some connection to a big company he was getting donations from? Or if she had a role in state government somehow? We didn’t know who she was, and I think that’s a problem,” Galloway says. “I think the public has a right to know she exists. Do we have a right to know every jot and tittle about her? No.”

VTDigger is hardly the only news organization to consider the matter.

At Seven Days, we’ve occasionally debated whether to address it in print. My boss, publisher and coeditor Paula Routly, always argued that the governor’s relationship status was fair game. She said her colleagues at newspapers around the country were baffled by Vermont reporters’ reluctance to write about it, describing the silence as self-censorship.

I typically argued that there was nothing inherently newsworthy about a gubernatorial partner unless he or she involved himself or herself in state business — or if somebody else made it an issue. But I also said that it might merit mention in a longer profile, if it illuminated an aspect of the governor’s personality or character.

To that end, I considered including the detail in a recent profile I wrote for Seven Days. But even though I’ve met Hunt a handful of times, I had no idea what her last name was. After briefly asking around about it, I felt foolish and desisted.

Nelson, the political science professor, says he respects Vermont’s tradition of allowing political figures to maintain private lives. But he agrees with Galloway that it was the couple that chose to bring their relationship into the open.

“If Peter feels comfortable bringing her into public, that’s Peter’s decision,” Nelson says. “He’s made the decision. He basically says, ‘I’m a divorced man. I can date whoever I wish. I’m not violating any moral code. This is my lady and I’m fine with it.’”

Shumlin certainly hasn’t gone out of his way to hide Hunt from the media. The two have dined with Routly and her partner, Sen. Tim Ashe (D/P-Chittenden), on occasion. And they showed up at Routly’s and Ashe’s home this summer to watch Burlington’s July 3 fireworks — an event attended by most of the Seven Days news staff.

To Galloway, that’s further evidence that Shumlin is trying to have it both ways. He’s perfectly comfortable appearing with Hunt in public — and in front of the news media — but when reporters ask about the relationship, they’ve suddenly crossed a line.