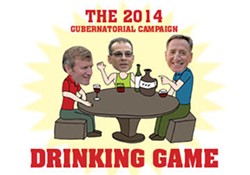 Vermont's uneventful election season has no doubt prompted many a political junkie to hit the bottle in despair. Only a handful of top office-holders face major-party challengers and, of those, fewer still could charitably be called "vigorous."

If you're not already four Gucci beers deep at the Three Penny Taproom, you've got at least one more opportunity to get sloshed on this year's low-key contests: tonight's final gubernatorial debate. Hosted by WPTZ-TV and taking place at 7 p.m. at the ECHO Lake Aquarium and Science Center, it'll feature Democratic Gov. Peter Shumlin, Republican Scott Milne and Libertarian Dan Feliciano.

To help you along the path to political inebriation, Seven Days presents the 2014 Gubernatorial Campaign Drinking Game.

The rules are pretty basic. Simply take a drink every time: