Media Note: Free Press Reporter Laid Off After Refusing to Reapply for Job | Off Message

Media Note: Free Press Reporter Laid Off After Refusing to Reapply for Job 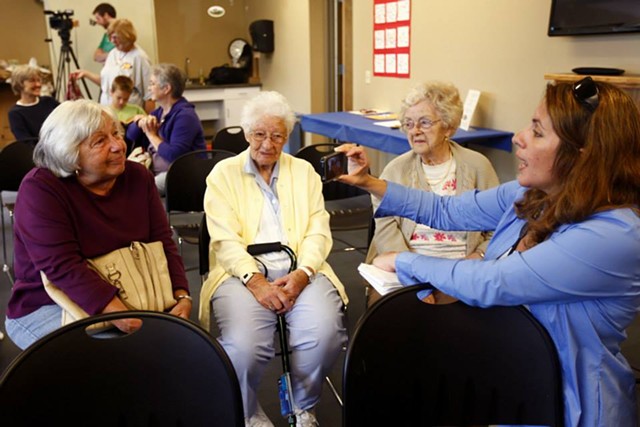 Like most of her colleagues at the Burlington Free Press, Lynn Monty was scheduled to interview for her own job last week. But shortly before the interview was set to take place Tuesday, Monty told a human resources executive from Freeps owner Gannett Company, Inc., that she wouldn't go through with it.

"The facts are that I opted out of the interview process and they laid me off," Monty said Monday in written responses to questions posed by Seven Days. "I loved my job, but I don't love Gannett. I will make a new way for myself that doesn't compromise my integrity."

After six years at the Free Press, she said, "Interviewing for a job I already held was degrading and demoralizing ... It compromised my integrity. And for the first time I couldn't see a future there for me."

According to Monty, the human resources executive notified her Wednesday morning that she no longer had a job.

"None of my local editors spoke to me of my decision or met with me at all," she said.

As the Free Press complies with a Gannett-wide mandate to trim newsroom budgets at each of its 81 local papers, 22 of its 26 editorial staffers have been forced to re-apply for their own jobs. Three editors and a reporter are exempt from the process. A 27th employee, veteran journalist Sam Hemingway, announced his retirement the day Free Press executive editor Mike Townsend publicly disclosed the re-application process.

Townsend, who has refused to speak with news organizations about the process, did not immediately return a call seeking comment Monday.

Monty said she believes she was the only staffer to decline the interview process. An internal document obtained two weeks ago by Seven Days indicated that final decisions from Gannett were due this week, though Monty said she expected them next week.

According to Monty, Gannett plans to pay her the difference between unemployment insurance compensation and her full salary for six weeks — one for each year she spent at the paper.

Monty was a community news and technology reporter for the Free Press' "Innovate" and "Vermont" sections, as well as for "Hometown," its free weekly. For the past two years, she said, she was the only reporter in the newsroom on Saturdays. As such, she simultaneously served as web editor, social media manager and editor that day of the week.

Monty was unsparing in her criticism of Gannett, which in August announced plans to separate its profitable television and online properties from its underperforming print products.

"The way people ingest news is changing and Gannett has been slow to adapt," she said. "I don't see any of their newsrooms succeeding and neither do they. That's why they severed them from broadcast."

Referring to the recent departure of Free Press publisher Jim Fogler, who decamped for a job at Party City last month, Monty said, "When our publisher jumped ship, I knew it was over."

Monty had kinder words for her former coworkers.

"I will miss my colleagues and I wish them all the best," she said. "It's been an honor to learn and work alongside them."