Interim Burlington School District Leaders Resign Over Conflict With Board 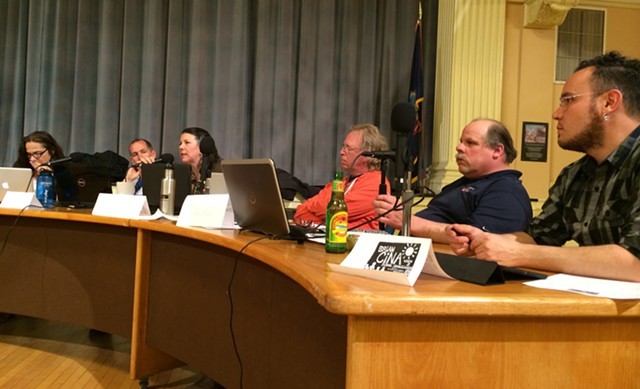 This story was updated at 4 p.m. 10/24/2014 to include comments from Burlington Mayor Miro Weinberger and Vermont Secretary of Education Rebecca Holcombe and at 5:30 p.m. with remarks from school board leaders.

In a scathing letter to board chair Patrick Halladay, the interim leadership team wrote, "There are board members who regularly make email and public meeting comments that malign central office administrators. This behavior only serves to expand the 'us against them' culture which has led to the departure of many directors in the last ten months."

On November 10, interim superintendent Stephanie Phillips, assistant superintendent Paul Irish and administrative officer Nikki Fuller will return to their former positions — respectively, the directors of curriculum; infrastructure and technology, and human resources and equity affairs. In their letter, they criticized the board for micromanaging and second-guessing their work. "We regularly experience members of this board choosing to disregard our expertise and sound advice, to disrespect us personally and to distrust our every action."

According to the letter, seven of 14 administrators have departed since last spring. It also cited the fact that the interim leaders have taken on additional duties without any additional pay.

At a hastily organized press conference later in the afternoon, Mayor Miro Weinberger had stern words for school leadership. "I am frustrated and disappointed that the school board and interim schools administration have not been able to come together and move forward during this challenging time. This is unacceptable. Burlingtonians will not tolerate this failure of leadership, which puts our children’s education at risk," he said, reading from a prepared statement.

The Burlington School District has been struggling to get a grip on its finances since the spring, when significant budgeting errors surfaced. Former superintendent Jeanne Collins left her job in June after reaching a separation agreement that ended her contract early. The district is looking for a new leader.

Weinberger reminded reporters that the school board had rejected his earlier offer to help with the school's "leadership transition" in part by them lending them his chief financial officer. Weinberger said he was again willing to offer "any reasonable assistance" to help the district find both an interim and a permanent superintendent, including picking up the phone and holding meetings to recruit qualified candidates. The turmoil in the district could make that task more challenging, he acknowledged.

Vermont Secretary of Education Rebecca Holcombe, who met with the mayor and Halladay, released a statement saying that she was monitoring the situation and willing to provide assistance.  “The Burlington School District board needs to put aside any individual agendas and put the focus back on kids and putting in place the people and processes that will enable the schools and students to thrive."

In a press conference inside Edmunds Elementary School Friday afternoon, the school board's chairman, Patrick Halladay, and its clerk, Liz Curry, said the board will hold an emergency meeting Sunday night and pledged to have a new temporary leadership team in place by November 10.

“We were surprised and greatly disappointed to learn today of the resignations of our senior administrative team from their interim roles as superintendent and senior directors,” Halladay and Curry said in a prepared statement. “As board leadership, we were attempting as much as possible to make their tenure in these interim roles fully supported. We are chagrined that they felt the situation was otherwise and that they also felt it necessary to take such drastic action.”

Halladay and Curry both strongly hinted that the discord stemmed from dealings between the administrators and a small number of school board members. “Individual board members need to be responsible for their own actions,” Halladay said. “They come to the work from different perspectives … and ways of interacting.”

When pressed, they declined to point to specific board members, but said that disagreements on the board have sharp.

“It has been difficult, in a difficult climate, for the board to come together … in a cooperative way,” Halladay said. “I have been frustrated. I have worked hard to try to change that.”

Despite the news, Halladay said he was still confident the board will be able to hire a quality permanent superintendent.

The pair cut off questions without discussing Weinberger’s renewed offer to have city officials assist.