In New Hampshire, Sanders Urges Students to Get Out the (2016) Vote | Off Message

In New Hampshire, Sanders Urges Students to Get Out the (2016) Vote 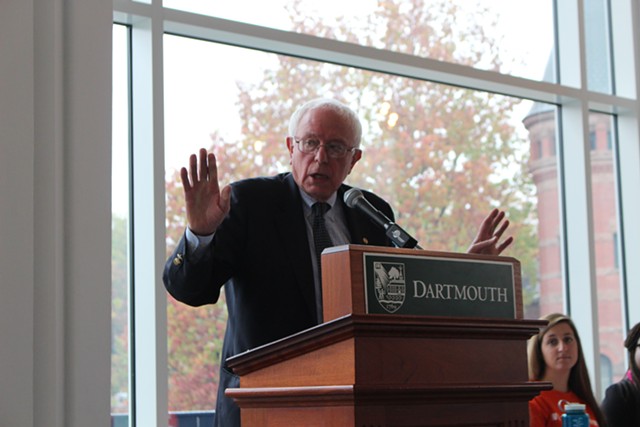 It was billed as a get-out-the-vote rally ahead of New Hampshire’s closely contested congressional elections. But in 50 minutes of remarks Thursday afternoon at Dartmouth College, Sen. Bernie Sanders (I-Vt.) only once mentioned the race that could determine control of the United States Senate: incumbent Sen. Jeanne Shaheen’s (D-N.H.) showdown against Republican Scott Brown, the former senator from Massachusetts.

The subject came up 40 minutes into the Vermonter’s stump speech, as he hailed the progress he believes women have made in American politics.

“In this state alone right now, you have a woman governor, you have two women United States senators and your two congressional seats are held by women,” he said, adding parenthetically, “And by the way, I hope very much you’ll return one of these women to the United States Senate, who’s doing a very good job.”

The rest of Sanders’ speech appeared focused on getting out the vote in another race: the 2016 presidential election.

His visit to Hanover marked his seventh day in New Hampshire this year — and his fourth this month alone. On Tuesday, he visited Keene State College and, later Thursday, he was scheduled to appear at Plymouth State University.

Sanders hasn’t confined his pre-presidential travel to the home of the first-in-the-nation primary. Earlier this month, he took his third trip to Iowa, which holds the first presidential caucuses, dropping by Davenport, Coralville and headlining a Johnson County Democratic Party barbecue in Iowa City.

Just last week, Sanders made his first trip to Nevada, which holds the second round of presidential caucuses, and to California, where he spoke at three events in the Bay Area.

At Dartmouth, some 75 students and Upper Valley residents gathered on the second floor of the Hopkins Center for the Arts to hear Sanders deliver a subdued speech touching on all his usual themes: economic inequality, the growing influence of millionaires and billionaires, the failings of the news media and, of course, Charles and David Koch.

Inevitably, the subject of his own presidential ambitions came up — though it was raised by a Vermonter, not a New Hampshirite.

“Senator, I’m a lifelong Democrat — avid Democrat — but I think that the current environment is so bad that our Democrats who are running for president will not talk about these issues,” Gaal Crowl of Pomfret said. “They’ve bought into the system enough that they’re part of the system. If you don’t run for president, we won’t be discussing these on a national level the way we should be doing it. Will you do that for us?”

To that, the previously quiet audience burst into applause and someone standing in the back of the hall let out a loud whoop.

“I’ve been going around the country and talking to a lot of working class audiences, and people are angry,” an unsmiling Sanders responded. “People know that the deck is stacked against them. People want real change. They want these issues not only discussed, they want policies that represent them and not just the 1 percent.”

“So for that reason, in fact, I am giving thought — I’m giving thought," he continued. "I haven’t made that decision yet. But if I do it, I want to do it well. Not just for me, but for you.”

To “take on the billionaire class” and the Koch brothers, Sanders said, it will take “millions of people who are willing to work and work hard.”

“You have millions of people knocking on doors. You don’t have 20 percent of the young people vote,” he said, pointing toward three Dartmouth students who had spoken before him and who were sitting at a table to his left. “So if I ran, what you guys would have to do is make sure that 70 percent of the young people vote. Do you think you can do that? Well, I don’t know. That’s hard. That’s really hard.”

After the event, Sanders elaborated on his thinking, which he said hasn’t progressed much in recent months. He said the question of whether to run is “a very, very difficult one.”

“Before I make that decision, I’ve got to be talking — and I am,” he said. “I’m talking to a whole lot of people. I’m getting information and ideas, but I haven’t made the final decision yet.”

By at least one metric — fundraising — Sanders doesn’t appear to be growing more serious about running.

In July, the senator reported raising nearly $716,000 for his campaign committee in the previous three months and another $9,242 for his political action committee, called Progressive Voters for America. That was a record for a year in which he did not face an imminent race for reelection.

But last week, Sanders reported raising just $152,000 for his campaign committee last quarter and another $27,000 for his PAC.

He spent a combined $166,000 from both accounts, mostly on campaign staff, airfare, hotel rooms, meals, office space and rental cars.

Sanders reported one distinctly presidential campaign expense: He paid Texas-based Landmark Aviation $11,128 to charter a plane last month from Washington, D.C., to Wisconsin. According to spokesman Michael Briggs, the charter was necessary to honor his commitment to attend the Fighting Bob Fest in Baraboo, Wis., on the same day he taped an appearance on NBC's "Meet the Press."

Among those benefiting from the senator’s largesse? Shaheen, who received a $2,500 check from Progressive Voters of America in September. (Throughout this election cycle, Sanders has contributed $7,500 to Shaheen.)

Asked how he planned to support Shaheen’s reelection bid, Sanders said, “We have contributed to her campaign significantly, and we’re trying to rally interest in the election among young people.”