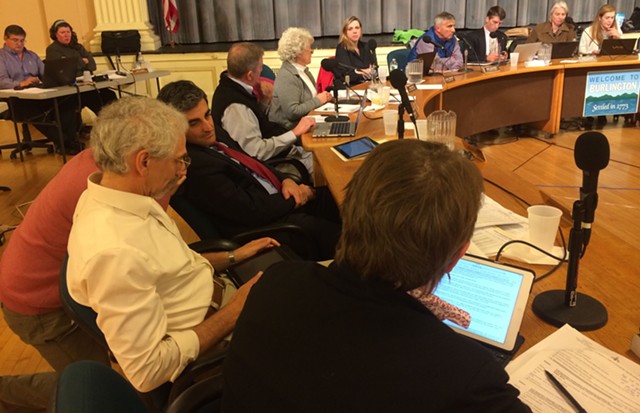 After more than a dozen people, including many refugees, voiced support for the proposals, the council took the first steps in what would be a lengthy, difficult process to bestow local voting rights on people who have not secured American citizenship.

By an 11-2 vote, councilors placed on the March ballot a non-binding referendum that would urge state lawmakers to change the Vermont constitution and give non-citizens the right to vote in municipal and school elections, with councilors Dave Hartnett (D-Ward 4) and Kurt Wright (R-Ward 4) opposed.

And in a unanimous vote, councilors ordered the charter change committee to draft a proposed ordinance for the March ballot that would allow non-citizens to serve on city boards and work as department heads.

Even if city voters approve the measures, they would face a lengthy journey before being implemented. The legislature would have to approve both them, and the constitutional amendment would also require a majority vote from all Vermonters. The city has launched similar campaigns at least twice in the past decade, but they foundered well before they could get to state lawmakers.

Jeetan Khadka, a refugee from Nepal who has been in Burlington for six years, mentioned that the city’s website features a welcome message from Mayor Miro Weinberger touting Burlington as “vibrant,” and “diverse.”

“It’s about building a city that stands up for its values,” Khadka said. “Burlington will be a better place to work, live, and raise a family if all residents are involved in the voting process.”

Burlington High School teacher Erika Lowe, the daughter of a Chinese refugee, said she teaches students in her school —14 percent of whom are learning English as a second language — to value their civic responsibilities.

“We spend a lot of time encouraging our students to value what’s happening in our community and to pay attention to the news,” Lowe said. “Essentially, we’re preparing out students to be a part of the community when they won’t have a vote in that community. Hearing that voice, it’s important.”

While the measures might face long odds in the legislature, Councilor Rachel Siegel (P-Ward) noted that one year after Burlington voters passed a non-binding referendum urging lawmakers to decriminalize marijuana, legislators made that historic step.

“The legislature really does look to us in Burlington as leaders for change,” Siegel said. “I think change is coming.”