The cost of gas in Chittenden County is "absurd," according to Burlington City Councilor Max Tracy — which is why he wants the city to consider opening its own station to sell gas to the public at a more reasonable rate.

The Progressive councilor plans to introduce a resolution to explore the idea at next Monday's council meeting.

For several years, residents and public officials alike — including Senator Bernie Sanders (I-Vt.) — have bemoaned the price at the pumps in the Burlington area, which is sometimes more than 25 cents per gallon higher than in places like Rutland. They've pointed a finger at several large gas dealers that dominate the region, arguing that the lack of competition has kept prices high.

Sanders, who held a hearing in Burlington two years ago to discuss the problem, has suggested the same solution.

It’s not unprecedented. At least one city, Somerset, Ky., has set up municipal-run stations to address a similar situation. An NPR story about the decision quoted one critic who described it as part of a "socialist movement," but the Republican mayor who set the plan in motion said it has successfully reduced gas prices.

"Gas suppliers are going to make a profit. We accept and understand that," Tracy said. But in his view, local gas dealers are reaping inappropriately high profit margins. According to the resolution, the Burlington gasoline market has been ranked one of the top five most lucrative places to sell gas in the northeast for nine consecutive weeks, starting in August. As Vermont Public Radio's Steve Zind reported yesterday, prices are currently dropping. 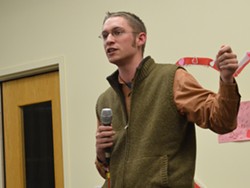 In Colchester, Costco has been trying since 2007 to open a gas station, but the chain has been stymied for years by two local gas dealers who've appealed its Act 250 permits on the grounds that the expansion would harm nearby wetlands.

Skip Vallee, owner of R.L. Vallee Inc. in St. Albans, is one of Vermont's largest fuel dealers and has led the charge against Costco. Asked for his perspective on a city-owned pump, he responded, "After they go through all the permitting that is required, I hope it works out better than Burlington Telecom and Burlington College." (The city runs Burlington Telecom; Burlington College is private school.) "In general," Vallee continued, "government entities don’t do very well when they try to compete with the private sector."

The proposed site for the city-owned pumps is at the Department of Public Works headquarters on Pine Street. The department already has pumps on the site. According to Tracy, it's unclear whether it would need additional permits under the proposal. The resolution asks the department to determine whether the proposal is feasible by January 12, 2015.

Tracy said he's got support among his fellow Progressives but he doesn't how the rest of the council feels about it. Mayor Miro Weinberger has not yet responded to a request for comment. Tracy said residents often tell him that Burlington is becoming increasingly unaffordable, and he thinks this is one way to address those concerns. "I think government should try to do innovative, different, bold things."