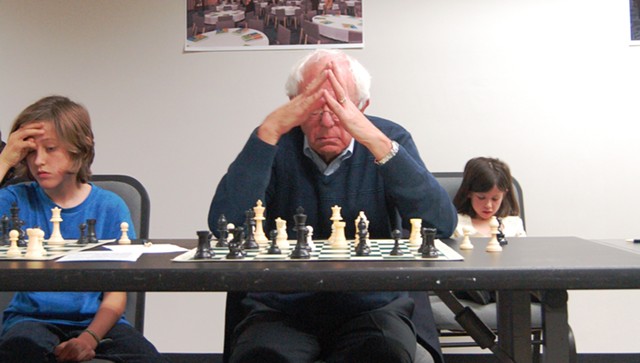 He was in a low-ceilinged room Thursday evening in Champlain College’s Hauke Family Campus Center along with 30 or so politicians, family members, college students and elementary school kids. Cameras flashed.

This was no town hall meeting or (not-yet-a) presidential campaign stop for the two-term senator, however. It was a chess match against Vermont’s lone national chess master, David Carter, and Sanders’ pawns were being knocked off like his political challengers in the Green Mountain State.

Half an hour later: “We are in a lot of trouble,” Sanders uttered with a bit less verve to his grandson, whom he’d recruited for help.

Sanders’ wife, Jane, is on the VEDA board of directors, and members of the whole Sanders family, according to Carter, are chess fans.

Carter introduced some of the more prominent guests — Sanders and his wife; Burlington Mayor Miro Weinberger, lieutenant governor candidate Dean Corren — and talked a bit about the “game of war.” Then the event was off, with handshakes and first moves rippling along the 20 chessboards set up around eight tables arranged in a U.

Sanders, playing white, opened with a move chess aficionados would recognize as respectable, if not radical. Carter responded in a blink and shuffled off toward the mayor’s chessboard.

The next time around, the man with the possible presidential plan moved his knight into attacking position, another standard. 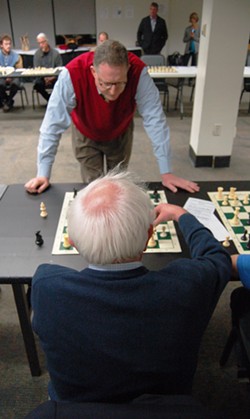 Soon, Sanders concentrated with fingertips pressed together, head clutched in both hands, then with hands searching the right ear and the chin for answers. What was the Bern to do? He signaled he needed more time to decide his move. As the game progressed, there was further senatorial head-scratching. In one turn, Sanders opted for an exchange of pieces, and things quickly went downhill from there.

Thirty minutes in, the first of Carter’s challengers was checkmated, getting out of the way what was inevitable for just about everyone. Jane Sanders, with a cheerful laugh and a handshake, conceded after 68 minutes. When Carter took a hair longer than usual (say, eight seconds) to make a play, Bernie Sanders asked, “Do you concede?” and laughed. When Carter moved, the senator’s head shook slowly and his hands drifted back to his face.

Sanders slapped his palm to his head. “I cannot believe … that I can’t see anything!” he said.

At 8:34 p.m., after a courageous 77 minutes, Sanders conceded with a slight grimace.

The exhibition continued, with novices hanging on stubbornly and chess club ringers working to sneak a win by the master. (I was knocked out after an hour and 53 minutes.)

Sanders, as he was leaving: “I beat him; I hope you guys can do the same!”

Two hours in, Corren — eyebrows jumping a pawn’s two spaces up his forehead after each move by his opponent — conceded. An enthusiastic 9-year-old battled admirably far past bedtime (and helped his parents, playing next to him, quite a bit). A small group gathered around a close match.

After two and a half hours, the exhibition came to a close. Carter’s record: 23 wins (some people played twice); one loss (to scruffy UVM student Jack Hanson) and one tie — to none other than Weinberger, who Carter called an "exceptional player."

The event, by all accounts, seemed a success. The mayor showed off his skills. One youth triumphed over experience, and the rest of us reveled in the surgical way in which we were taken apart. Whether Bernie Sanders will start attending chess club gatherings remains to be seen.