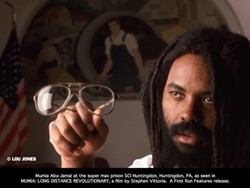 The Plainfield college secretly moved its ceremony from 4 p.m. to 1 p.m., citing lingering controversy over the 23 graduates' decision to invite Mumia Abu-Jamal to prerecord a commencement address from a prison cell where he is serving a life sentence. Abu-Jamal, who has become a human rights activist and cause célèbre for some liberal activists during his time in prison, received a bachelor of arts degree from Goddard in 1996 while incarcerated.

"There have been certain posturing and words that have come our way that have led us to make a security-based decision," said the college's interim president, Bob Kenny, according to WCAX.

The college received hundreds of threats against staff and students in the days after they announced Abu-Jamal's speech, VTDigger reported. The graduation ceremony was closed to the public.

Abu-Jamal was convicted of murder in the 1981 death of Philadelphia police officer Daniel Faulkner, and initially was sentenced to death. His sentence was commuted to life imprisonment without parole in 2011, after a federal appeals court ruled that he was entitled to a new sentencing hearing because jurors had heard potentially misleading instructions during his trial. He was transferred from death row to the Mahanoy State Correctional Institution in Frackville, Penn.

Goddard College released a written copy of his speech, in which he reminisced about visiting Vermont in the 1970s and urged students to follow their passions.

"I've been away from Goddard College, perhaps longer than most of you have been alive," he said. "I last walked on the campus in the late 1970s. But although it was undoubtedly quite a long time ago, it still sits in memory, and sometimes even visits in dreams of the funky atmosphere that suffused the campus, like a cloud of exhaled marijuana smoke. What really moved me however was the green life — the abundance of grass, trees standing like ancient sentinels, the majestic beauty of Vermont, which possessed a beauty that was, to a guy from the city, simply breathtaking."

Jamal did not discuss his crime or incarceration in his speech.

"How does a young person ... looking at the vast wide world, with a quiet sense of terror, have a voice amidst that monstrous din?" he said. "How does she/he find that voice that can create space, to think, to be — to grow? We know that it must come from the place within, that which moves you, that which stirs you, that which is your truest, deepest self."

"Your invitation to this convicted murderer demonstrates an absolute disregard for the family of Danny Faulkner and the families of other police officers who have been killed while serving their communities," Vermont Troopers' Association President Mike O'Neill wrote. "While our nation is searching for solutions to gun violence in our schools and communities, we are outraged that Goddard College is hosting a man who shot and killed a police officer. A college commencement ceremony should be conducted to honor the achievements of graduates, not provide a forum for recognition of a convicted killer. Invited speakers should be persons who exemplify honor, integrity and ethics, not the hate-filled rants of a killer."

Philadelphia police officers and members of Faulkner's family yesterday gathered at a plaque honoring Faulnker and held a silent vigil.

"Mumia Abu-Jamal will be heard and honored as a victim and a hero by a pack of adolescent sycophants at Goddard College in Vermont," she said."Despite the fact that 33 years ago, he loaded his gun with special high-velocity ammunition designed to kill in the most devastating fashion, then used that gun to rip my husband's freedom from him —today, Mumia Abu-Jamal will be lauded as a freedom fighter."

Her statement continued, "Undoubtedly the administrators at Goddard who first accepted, then enthusiastically supported Abu-Jamal as their speaker will be moved by his 'important message' when, if one distills that message to its basic meaning, it amounts to nothing more than the same worn-out hatred for this country and everyone in law enforcement that Mumia Abu-Jamal has harbored his entire life ... This is not a matter of First Amendment rights — it's a matter of right and wrong."

Despite the vocal protests, Goddard College officials stuck by their students' decision.

"Many diverse commencement speakers have been chosen to represent perspectives not normally in our discourse," the college said in a prepared statement. "Even if it is unpopular, we need to listen to and engage in difficult discussions. This is what free speech is all about. Our students understand there is great merit in what Mumia Abu-Jamal has to say. It is important that we at Goddard College support this complicated inquiry and the freedom of speech."