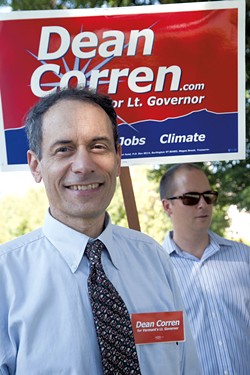 Progressive lieutenant gubernatorial candidate Dean Corren won a write-in campaign for the Democratic nomination last week, according to final results certified Tuesday by a statewide canvassing board. But Corren's Republican opponent, Lt. Gov. Phil Scott, didn't do so bad himself.

The final tally shows that 3,874 — or 60.5 percent — of the 6,405 voters who took the Democratic ballot wrote-in Corren's name, while 1,895 — 29.6 percent — did so for Scott. The former publicly campaigned for the Democratic nomination, while the latter did not.

In the race for the Republican gubernatorial nomination, Pomfret businessman Scott Milne wound up with 11,486 of the 16,010 GOP ballots cast, or 71.7 percent. Libertarian Dan Feliciano of Essex won 2,093 write-in votes, or 13.1 percent. Steve Berry of Wolcott and Emily Peyton of Putney trailed with 1,106 and 1,060 votes respectively, or just under 7 percent.

Milne will face off against two-term Gov. Peter Shumlin, who took 15,260, or 77 percent, of the Democratic votes cast. H. Brook Paige of Washington won 3,199 votes, or 16.1 percent. In that race, 1,369, or 6.9 percent, of voters wrote in the names of others, though the secretary of state's office did not release the name of the top write-in vote-getter. Supporters of Shumlin's recently-fired Agency of Human Services secretary Doug Racine had pledged to vote for him.

In the race for the Republican congressional nomination, 2012 nominee Mark Donka of Hartford narrowly defeated two others to oppose four-term Congressman Peter Welch (D-Vt.). The final results show that Donka won 4,340 of 12,888 votes, or 33.7 percent. Donald Russell of Shelburne won 4,026 votes, or 31.2 percent. Donald Nolte of Derby won 3,803, or 29.5 percent.

The same can't be said for Democratic Attorney General Bill Sorrell. A last-minute Republican opponent, Shane McCormack of Underhill, won 794 write-in votes out of 2,176 cast to win the GOP nomination for AG.

Overall, turnout in last Tuesday's primary was remarkably low. Just 39,424, or 9 percent, of the state's 440,194 voters showed up. Of those, 55 percent cast Democratic ballots, while 43 percent cast Republican ballots. Less than 1 percent each took the Progressive and Liberty-Union ballot.