On Eve of Primary, Some GOP Officials Back Libertarian Gubernatorial Candidate | Off Message

On Eve of Primary, Some GOP Officials Back Libertarian Gubernatorial Candidate 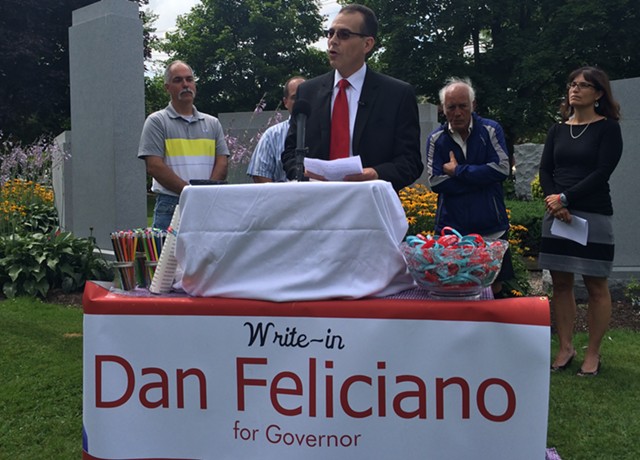 But as Tuesday's primary election draws nigh, several of those leaders have jilted Milne in favor of Vermont Libertarian Party candidate Dan Feliciano, who hopes to win the Republican nomination as a write-in candidate.

Joining Toensing are party treasurer Mark Snelling, a 2010 candidate for lieutenant governor and the son of the late governor Dick Snelling; Rutland City Treasurer Wendy Wilton, the party's 2012 nominee for state treasurer and a state party committee-woman; Darcie Johnston, a party operative who managed Randy Brock's 2012 gubernatorial campaign; and a dozen other lower-level party activists who announced their support for Feliciano on Monday.

"He has articulated positions that I think really face Vermonters, and he doesn't shy away from speaking specifically to those issues," Snelling says.

Like others, Snelling says his support for Feliciano stems in part from dissatisfaction with Milne, who Snelling says has not taken a firm enough position in opposition to Shumlin's proposed universal health care overhaul.

"I think [Milne's] wait-and-see approach is the incorrect approach to be taking right now," Snelling says. "I think there's plenty of information today that would suggest that single-payer is going to make health care more expensive and less affordable in the future. I think his unwillingness to take a stance on that is a problem."

Even Feliciano's most stalwart supporters concede that he faces an uphill battle in winning the Republican nomination. More voters would have to remember to write in his name than simply fill in a circle next to the names of those candidates listed on the ballot: Milne, Emily Peyton of Putney and Steve Berry of Wolcott.

"Having your name on the ballot is a tremendous advantage," Snelling says. "Whether Dan can overcome that or not, I really don't know the answer."

It's also unclear whether the support voiced by the party's conservative wing is shared by its rank-and-file. Milne believes it's not.

"I'm quite confident that, by and large, the vast majority of Republicans are supportive of what I'm doing," he says. "I've had a good reaction when I've talked to them. I think it's going in the right direction."

Indeed, hours after Feliciano's campaign released a list of prominent GOP officials supporting him on Monday, Milne's campaign did the same. Among those listed in Milne's corner were former governor Jim Douglas, who introduced the candidate at his campaign kickoff, five state senators and 32 state representatives.

Milne says the unexpected challenge from Feliciano has made him "a stronger candidate," and he believes others will eventually back him.

"I'm hopeful that as we come out of the primaries, folks that have not come around to support me will come around," he says. "We've got a real chance to knock off the worst governor in Vermont in 50 years."

Of course, the Feliciano-Milne contest isn't likely to end on Tuesday.

Even if he loses the Republican nomination, Feliciano says, he plans to continue campaigning as the Libertarians' nominee. That could well end up splitting the anti-Shumlin vote in the general election, further imperiling conservatives' chances of unseating the well-financed incumbent.

"That's quite possible, but quite frankly, the way things are going, if [Milne] were able to eke out a victory, I think my message going forward is so clear that I'd continue to have those GOP voters — and then some," Feliciano says.

What's unclear is how many of Feliciano's top-tier GOP supporters would stick with him if he loses Tuesday's primary. Neither Toensing nor Snelling will say what they'd do.

"I'm focused on tomorrow, and I expect Dan's going to pull off a win," Toensing says.

"I don't know the answer. I guess I'd have to see more of Scott Milne and see Scott take more positions going forward," Snelling says. "It's true I've voted for the Republican candidate for governor every year I've been able to vote. I'd be a little surprised if that didn't continue. But I'd like to see a different approach to the campaign than what Scott has taken so far."

Johnston, perhaps the party's most strident activist and one of its only professional operatives, says she's with Feliciano for the long haul. She thinks that Feliciano would not only best Milne in a general election, but would topple Shumlin, as well.

"I think [Shumlin] can be beat if Scott Milne continues to be unwilling or unable to articulate specific views on the issues most important to Vermonters," Johnston says. "Dan will energize an electorate that will get out to vote, and that will energize Vermonters to support down-ballot candidates who will get in the legislature and change things."