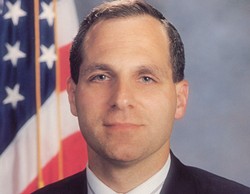 Louis Freeh, who led the Federal Bureau of Investigation from 1993 until 2001, was seriously injured in a Barnard car crash Monday afternoon.

According to Vermont State Police spokeswoman Stephanie Dasaro, Freeh sustained unspecified injuries in a single-vehicle crash while driving south on Route 12. His grey GMC Yukon left the east side of the road, striking a mailbox, a row of shrubs and, finally, a tree, Dasaro said in a written statement.

Freeh was airlifted to Dartmouth Hitchcock Medical Center in Lebanon, N.H. He was the only person injured in the crash, which was reported to the state police at 12:16 p.m.

Dasara said Monday night that the cause of the crash had not been identified. On Tuesday, she said a preliminary investigation had ruled out drugs and alcohol as a factor, though the accident remained under investigation.

FBI spokesman Paul Bresson confirmed Monday night that the former director was injured in the crash, but he declined to provide further details.

"The thoughts and prayers of the entire FBI remain with former director Freeh and his family tonight," FBI Director James Comey said in a written statement provided by Bresson.

According to the Burlington Free Press, Freeh owns a summer home in Barnard. Sen. Patrick Leahy told Seven Days last year that Freeh once went target-shooting with him at the senator's Middlesex home.

Since retiring from the FBI in 2001, Freeh, 64, has worked as a lawyer and consultant. He lives in Wilmington, Del.