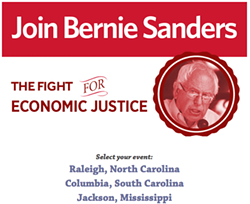 Sen. Bernie Sanders (I-Vt.) is returning to the early presidential primary state of South Carolina next week during a three-day tour of the South.

As he weighs whether to join the 2016 presidential race, Sanders will hold town hall meetings in Raleigh, N.C., Columbia, S.C., and Jackson, Miss., next Wednesday through Friday, according to South Forward, a Democratic super PAC that's co-sponsoring the forums.

Sanders, who chairs the Senate Committee on Veterans' Affairs, will also accept the American Legion's Patriot Award next Wednesday in Charlotte, N.C., where the veteran service organization is holding its annual convention, according to Sanders spokesman Michael Briggs. Sanders will share the award with House Committee on Veterans' Affairs chairman Jeff Miller (R-Fl.), with whom Sanders negotiated a major overhaul of the Department of Veterans Affairs last month.

This isn't Sanders' first southern exposure. Last October, he joined South Forward for town hall meetings in Alabama, Georgia and South Carolina. (He had to phone-in to a fourth forum, scheduled for Mississippi, because he was stuck in Washington, D.C., on Senate business.)

According to Briggs, Sanders "will be visiting community leaders in each state" he travels to next week. He will not hold or take part in any fundraisers. The first leg of the senator's trip will be paid for by his campaign committee, Friends of Bernie Sanders, while the rest will be paid for by Sanders' political action committee, Progressive Voters of America, Briggs says.

Also sponsoring some of the events are the South Carolina Progressive Network, IBEW Local 480 and the Mississippi AFL-CIO.