Conservative Support in School Board Race Stirs Debate | Off Message 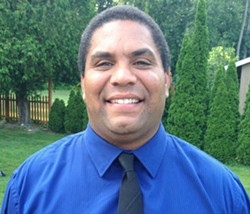 Does it matter that a self-described Democrat running for the Burlington School Board is getting bankrolled by conservative supporters? That question is fueling lively debate among residents in the New North End's Ward 7, where there’s a competitive, three-way race for a seat that opened up when Greg Jenkins resigned several months ago.

Former school board member Linda Deliduka, who lost her seat last March to newcomer David Kirk, is facing off against Kevin Garrison and Ed McMahon. The election is Tuesday.

The candidates all live within a few blocks of one another in the Village Green neighborhood. The school board is considered a nonpartisan body, but Garrison's political affiliations are causing a stir.

Lenore Broughton, who funneled more than $1 million into the conservative super PAC Vermonters First, gave Garrison $500, according to the August 18 campaign finance disclosures. Scot Shumski, a conservative and outspoken member of the school board who is also running for state representative, is acting as Garrison's campaign manager. He introduced Garrison to Broughton and also encouraged the Burlington Republicans to help out. The party chipped in $150.

A self-described "Blue Dog Democrat," Garrison points out that he's got Democrats backing him, too, including City Councilors Tom Ayres, Dave Hartnett and Bianka Legrand. He sees his bipartisan backing as a good thing. "I come from humble roots, and I’ve been able to build a coalition of people that support me — Republicans, Democrats and independents. At the end of the day, I think that’s what we need to move forward with our schools."

Garrison said Shumski's a good friend — they went to high school together — and they are both focused on reining in school spending while promoting "better outcomes for students." On other topics? "We agree to disagree, and we only talk about the things we agree on," he said. As for his meeting with Broughton, "She’s a sweet lady. I sat down and I talked to her and I look forward to talking to her again if I have the need to… and she was concerned about the outcomes for our students just as much as I was, and basically that’s what our conversation was based on."

Regardless of who gives him money and helps on his campaigns, Garrison insisted, "I’m a man of my own convictions, my own values, my own ideas."

Not everyone is convinced. "We are who we keep company with," said Jenkins, who's supporting Deliduka. "If Kevin really thinks that the company he keeps is going to have no bearing on the way he is going to govern on the school board, then he is very naïve."

Ayres said he's had to defend his endorsement of a candidate  who's also getting support from the far-right side of the aisle. "Quite frankly, people kind of freaked out when they saw the 'Kevin Garrison for School Board' on my lawn," he said.

The Democratic councilor continues to support Garrison but he actually shares some of his neighbors' concerns. In a post on Front Porch Forum, he wrote, "Those of us who have been elected to local and state office know that the financial, political, and logistical support of Scot Shumski, ultra-conservative funder Lenore Broughton, and others from the far-right fringe comes with expectations and a price tag."

Ayres said he and others are concerned that the national organization, American Majority — which trains conservatives to run for down-ballot offices — could make inroads on the Burlington School Board. Shumski participated in a training earlier this year before winning his election. "Much of this discussion has focused on Kevin’s association, to put it bluntly, with a skillful, well-organized, and well-funded group of far-right, ultra-conservative Tea Party activists seeking to gain a foothold in Burlington and communities in our region," Ayres wrote in a Front Porch Forum post.

In a Front Porch Forum post titled "The Real Scot Shumski," Shumski defended his intentions. "Whether it's my role on the Burlington School Board or my candidacy for the statehouse its about improving the community I live in ... Let me close by focusing NOT on the poisonous, negative attack launched by Tom Ayres (that really serves no purpose but to distract and divide our community) but rather on what is truly important, electing Kevin Garrison to the Burlington School Board from Ward 7. Knowing that my children will have another tireless advocate for them on the school board is what drives me in my support for Kevin Garrison."

According to Shumski, people like Ayres are the ones politicizing the school board race. "There a small minority of extreme radicals in the New North End who are making an issue of it," he said in an interview. "Do you think people as principled as Kevin and I are going to be swayed by someone who contributed to us?" During his door-knocking rounds, Garrison also said he's seen "no evidence" that people are concerned by his Republican supporters.

Garrison added that he had to look up what American Majority was to figure out what people were alarmed about. "I'm going to accept the support from all parties and I think that's what we need to move forward," he said.

For Deliduka, there's a déjà vu quality to the situation. Last March, Kirk clobbered her on the fundraising front, and he too was helped along by a $1,000 donation from Broughton. (Kirk raised roughly $2,500 total while Deliduka brought in less than $500.) So far, Garrison has raised $1,500. Deliduka said she just recently crossed the $500 mark.

Deliduka declined to weigh in on her opponent and his Republican supporters. " I don't want to put out anything that says I’m concerned about that. Where we should be putting our time and thoughts is on the schools."