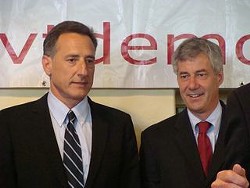 “As governor, these decisions are never easy, but I felt that it was time for a different kind of leadership,” Shumlin said at a press conference Tuesday afternoon at the Rutland Transfer Station.

Shumlin, whose office announced in a press release Tuesday morning that Racine was “stepping down,” declined to elaborate on the nature of his secretary’s departure.

“I’m not going to talk a lot about why now or look in the past,” the governor said. “What I’m saying is: I’m grateful to Sec. Racine for his service. I have to make a judgment as governor when I feel that an agency needs new leadership. I made that judgment.”

Asked what, specifically, prompted Racine’s exit, Shumlin said, “Specifically answering your question is exactly what I’m not going to do.”


Racine, however, was more than willing to detail his firing. In a phone interview, he said he was summoned to the 5th floor of the Pavilion State Office building at 4 p.m. Monday for a meeting with Shumlin chief of staff Liz Miller and Secretary of Administration Jeb Spaulding.

“I went in and sat down. They said, ‘The governor wants to make a change at your agency.’ I said, ‘Who would that be?’ Jeb looked at me and said, ‘You,’” Racine recalled. “We talked about it for a few minutes and then I went to the office and cleaned out my desk.”

According to Racine, Shumlin called him an hour later to discuss the decision.

“That’s generally the way it works: Governors do good news; staff does bad news,” Racine said. “I needed two votes for this job: I needed mine and I needed his. I lost his.”

Replacing Racine on an interim basis at the Agency of Human Services is Dr. Harry Chen, a former Democratic lawmaker and emergency room doctor who has served for nearly four years as commissioner of the Department of Health. 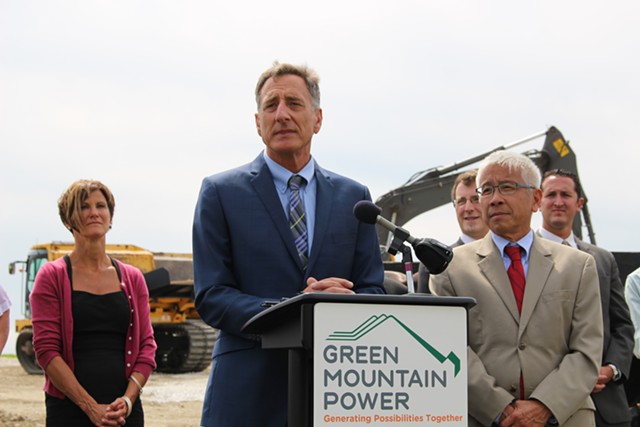 Those episodes prompted several top Republicans to call on Racine, DVHA Commissioner Mark Larson and DCF Commissioner Dave Yacovone to resign. But at Tuesday’s press conference, Shumlin said he had “confidence in all of [his] commissioners and all the people who work for state government.”

Asked whether he expected further personnel changes within AHS, the governor said that he had charged his interim secretary with a review of the agency — and its leadership.

“What I’ve asked ingoing Sec. Chen to do is to go in and see what’s working well, what’s not working well — like I do with any secretary — and make any recommendations, partner with him to make any changes that might be necessary,” Shumlin said.

Chen, who appeared beside Shumlin at the press conference, said it was too soon to say what those recommendations might entail.

“As the governor said, my task is really to go in with my leadership style, get to know the agency, get to know the breadth of the agency and its almost 4,000 employees, see what’s working right, see what’s not working right. And, certainly, if there are ways that I feel, in terms of leadership changes that need to be made, to address those challenges, then that’s something I’m obviously willing to do,” Chen said. “I’ve been in the job for about, what, two hours now? And so it’s really hard for me to make any promises at this time.”

Chen also declined to say whether he would seek the position on a permanent basis.

“I’ve made a commitment through the end of the year, and certainly that’s up to reevaluation as we see how things go,” Chen said.

A former medical director of Rutland Regional Medical Center, Chen served in the Vermont House from 2002 through 2008. He will be replaced at the Department of Health on an interim basis by Deputy Commissioner Tracy Dolan.

Racine, a Democrat, has been a fixture in Vermont politics since 1983, when he was first elected to represent Chittenden County in the Senate. He served three terms as lieutenant governor before losing the 2002 gubernatorial race to then-state treasurer Jim Douglas. Racine returned to the Senate in 2006 and made a second run for governor four years later, narrowly losing the Democratic nomination to Shumlin.

Racine was one of several former rivals to win posts in the Shumlin administration in January 2011, but he never appeared particularly close to the governor. As criticism of his agency mounted, Racine rarely appeared in public with his boss and largely stayed out of the press.

That may have played into Shumlin’s decision to dismiss him. According to Racine, the governor wanted a secretary more willing to engage with the news media and interest groups.

“If anything, it was perhaps not being out there enough,” Racine said.

Nevertheless, he said, his firing came as a surprise.

“There were some things I’ve said and done which did not meet with approval. We talked about those and worked through those. But I didn’t sense there was dissatisfaction. The governor never expressed dissatisfaction with me,” Racine said. “He said he just wants a different style, a different focus moving forward, and he felt someone else could do that for him better than I could. But they didn’t say, ‘Hey, you screwed up DCF or Vermont Health Connect’ or anything like that. It wasn’t anything like that. It was just time for something different.”

Racine conceded that the governor had expressed frustration in the past about the pace of change at DCF.

“He at one point felt that we needed to move more quickly and put some changes in place,” Racine said. “It was a question of being aggressive enough in making changes.”

Racine defended Yacovone’s and Larson’s leadership, saying that they have “very difficult jobs.”

“I don’t want to see Dave vilified because sometimes bad things happen, even as you must learn from these things and say, ‘How do we do things better?’” Racine said. “I’m not sure who could succeed with Vermont Health Connect given the problems with [former state contractor] CGI, quite frankly. Mark is a hardworking guy and I think he was dealt an almost impossible task in trying to keep that running smoothly.”

Despite his firing, Racine said he continues to believe Shumlin is performing admirably as governor.

“I think he’s doing a really good job,” he said. He’s got an ambitious agenda and I really appreciate that. It’s a challenging agenda. It’s tough. You have to take risks to accomplish things, and sometimes when you make risks things don’t go right.”

Racine said he does not know what’s next for him.

“I’m going to finish these calls and, if it doesn’t rain, I’m going to go mow my lawn,” he said.

Asked whether he would consider returning to electoral politics, Racine said, “You never say never, but right now I have no desire to do that.”

That said, Racine would like to remain engaged in public service.

“I like the public policy arena. Despite its downs, as well as its ups, I like the political arena. To me, it’s always challenging and rewarding,” he said. “This job has been as rewarding as anything I’ve ever done.”