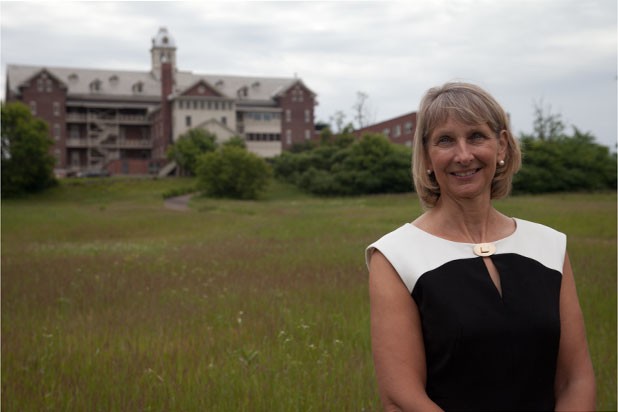 It’s no secret that Burlington College has a big, long-term debt. In 2011, it borrowed $10 million to move from a 19,000-square-foot building to the 90,000-square-foot former Catholic orphanage it currently occupies.

But the regional accreditation group that put the tiny liberal arts college on probation at the end of June appears to be worried about more immediate financial problems.

In a letter the New England Association of Schools and Colleges sent Burlington College on June 27, NEASC explained why it put the school on probation: It described an institution struggling to pay its bills. College officials, who announced the news on July 7, declined to release the document publicly. Seven Days obtained a copy earlier this week.

Burlington College's long-term debt service plan is to increase enrollment from roughly 290 students to as many as 750, and to sell and lease parts of its lakeside property to a local developer.

In the meantime, the 42-year-old institution has no cash reserves, according to NEASC's letter. The letter stated that the accreditation body was “extremely concerned that the College does not have sufficient cash to meet its biweekly $90,000 payroll this summer, and we are distressed to learn that the institution may use Fall 2014 tuition income” to help pay those salaries.

NEASC also expressed concern that the college failed to collect money it was owed, while, at the same time, its bills have increased. According to the letter, Burlington College told NEASC that “poor practices” in the business office had prevented it from recouping $150,000 of operating cash. And, by the end of Fiscal Year 2013, its “accumulated accounts payable" had grown to three times the institution’s average.

The NEASC commission suggested that it lacked faith in the college’s president, Christine Plunkett, stating, “The fact that these financial management problems were exacerbated under the leadership of the current President, Burlington’s former CFO, does not bolster the Commission’s confidence in the ability of the college to resolve the issues successfully and in a timely manner.”

Plunkett, who has worked at the college since 2007, was chief financial officer before being appointed president in June 2012.

NEASC also took notice of the college’s anticipated deficit for FY2014 — $170,000, which is less than the previous year — and noted, “it is not clear that the College has a realistic plan to achieve operating surpluses in the future.”

On top of its financial problems, Burlington College will also need to assure the accreditation organization that its governance structure is sound.

NEASC has issued a “Formal Notice of Concern” that the College was in danger of not meeting the Commission’s standard on "Organization and Governance,” though the commission acknowledged efforts to strengthen the board of trustees.

There have been other setbacks as well. The college has been looking for ways to capitalize on its valuable real estate — either by renting the property for festivals or organizing events itself.

Dabroski was hired at the end of last year to create an accredited music program that college officials hoped would attract more students.

In an interview, Dabroski said the Mighty Mozart festival had turned into a “debacle,” and he left because of inept leadership. “The institution is a mess financially and in terms of leadership,” Dabroski said. As of late June, only 40 season tickets had been sold, and according to Dabroski, the administration had failed to arrange for basic necessities such as a stage and portable rest rooms. “This type of disorganization just makes me want to run for the hills,” he said.

President Plunkett was not available to comment on Tuesday, according to college spokesperson, Coralee Holm.

NEASC acknowledged that Burlington College has taken steps to stabilize its finances and wrote that they "believe that the institution can meet the [financial] standard in two years."

The college's board chair, Yves Bradley, said the entire board has complete confidence in Plunkett’s ability to return the college to sound financial footing. “We’re very confident in the plan going forward,” he said. “Nobody lives and breathes that college like Christine. She knows the college's finances inside and out.”

Bradley, who also received a copy of the letter from NEASC, said being put on probation has served as “a catalyst” for addressing the college’s short-term financial issues, but all of the issues it raised were already on their radar. “Obviously we are not taking this lightly, but it’s no surprise to us.”