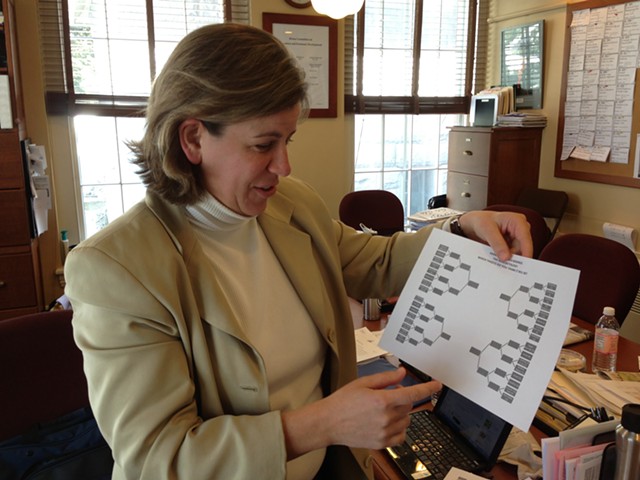 Reps. Heidi Scheuermann (R-Stowe) and Paul Ralston (D-Middlebury) spent four years sitting next to one another on the House Committee on Commerce and Economic Development, brainstorming ways to make Vermont more friendly to business.

Now, the bipartisan pair is launching a new political action committee focused on electing kindred spirits to the legislature.

"It's really important to bring more attention to economic development in Vermont and kind of move it away from being an also-ran in the Statehouse," says Ralston, who is stepping down from his House seat when his term concludes at the end of the year. "It certainly felt like there was a lot more energy and effort put into social issues. That's fine and everything, but I would like to see a little more of that energy and enthusiasm go into economic issues."

Scheuermann's and Ralston's new group, dubbed Vision to Action Vermont, will raise money, host events and offer training to candidates it endorses, its founders say. According to Scheuermann, who publicly weighed a run for governor this spring, the PAC will likely back a variety of Republicans, Democrats and independents, though she wouldn't name names.

"We really want independence in peoples' thinking," she says. "Common sense and balance, I think, is what we're really looking for."

While both legislators support Republican Lt. Gov. Phil Scott's reelection bid, neither will say whether he's likely to receive Vision to Action's support.

"He has a lot of credibility and he has a strong record," Ralston says. "I don't know what help he needs."

So far, the PAC has raised just $2,000 — $1,000 from each of its founders — but Scheuermann says other donors have committed to contributing. She says those donors do not include retired Wall Street executive Bruce Lisman, who founded a group with a similar platform, Campaign for Vermont, and who has hinted he might invest in this fall's elections.

Unlike the state's independent, expenditure-only PACS, including the conservative super PAC Vermonters First, Vision to Action plans to abide by the state's fundraising and spending limits, Scheuermann says. As such, it can only accept $2,000 from each donor and contribute $6,000 to each candidate it endorses.

Vision to Action's founders say that candidates seeking the group's support will face no litmus tests, but Ralston says he's interested in learning where candidates stand on single-payer health care, tax reform and education governance. Ralston, who voted for the law that set Vermont on the path to single-payer, says he is concerned that Vermonters don't know enough about how Gov. Peter Shumlin plans to finance the overhaul.

"I think it's unfair to ask someone to support something when they don't know what it is," he says. "I want candidates who say, 'My eyes are wide open. I want reform that gives us better health care and costs us less.'"