Sanders to Return to Iowa in September | Off Message

Sanders to Return to Iowa in September 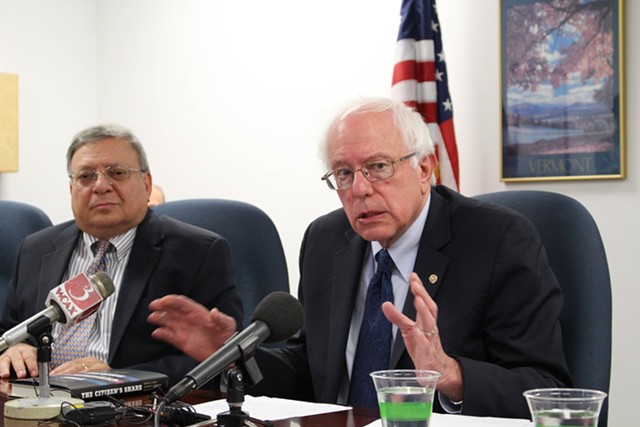 As he continues to explore a 2016 run for president, Sen. Bernie Sanders (I-Vt.) will return to the first-in-the-nation caucus state of Iowa this September.

Sanders plans to hold town meetings in Dubuque, Waterloo and Des Moines the weekend of September 13, according to spokesman Michael Briggs. Sanders will combine the trip with a previously scheduled appearance in Wisconsin at the Fighting Bob Fest, an annual gathering to celebrate the life of progressive icon — and senator-turned-presidential candidate — Robert La Follette.

September's trip will mark Sanders' second to the Hawkeye State this year. He traveled to Iowa City in May to headline the Clinton County Democratic Party's Hall of Fame Dinner and, according to the Daily Beast, met with activists there and in Des Moines. Sanders has also held political events twice in New Hampshire this year, in April and June.

Last week, Sanders reported raising an unusually large sum of money for a year in which he does not face reelection. The Vermont independent collected nearly $716,000 in the past three months, boosting his campaign treasury to $4.4 million. Sanders, who was reelected to a second six-year term in 2012, will not have to defend his Senate seat again until 2018.

In an interview on WBUR’s “On Point” Monday morning, Sanders told guest host John Harwood that he has not yet decided whether to seek the presidency in 2016.

“We’re thinking about it,” he said. “And whether I do or not really depends on whether we ascertain if there is the kind of support needed to bring about a political revolution in this country.”

Noting that the conservative industrialists Charles and David Koch were unlikely to back him, Sanders said that, “If I run, it will not be a traditional-type campaign.”

“Can we engage those millions and millions of people who are working longer hours for lower wages, who are maybe working part-time jobs, who don’t have any health care, who are disgusted by the growth of wealth and income inequality in America? Can we engage them in a grassroots political revolution?” he asked. “The answer is, ‘I don’t know.’ But that’s what I’m trying to find out. If I think we can, I will run. And if I think, at the end of the day, that really can’t happen, I won’t. But that’s the question that I’ve got to answer.”

Asked how he would differentiate himself from former secretary of state Hillary Clinton, should she choose to run, Sanders said that it’s unclear, thus far, “what her agenda and program is.”

“My campaign would not be a campaign, if I ran, against Hillary Clinton,” he said. “It would be a strong, strong campaign in defense of the working class in this country, a middle class which is disappearing. And what I would be prepared to do, as I have throughout my political career, is take on the big-money interests that hold so much power, in terms of our economy and in terms of our political life.”

This post was updated at 12:38 p.m. to include Sanders’ comments on WBUR. It has also been updated to reflect the fact that Sanders will be visiting Waterloo in September; Sanders’ staff initially said he would be visiting Iowa City.