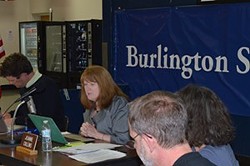 Updated at 5:15 p.m. 5/15/2014 to reflect a clarification from school officials that a search committee will recommend Phillips be voted in as interim superintendent next month.

The Burlington School Board announced Friday that Stephanie Phillips, a longtime educator who's been the district's curriculum director since 2006, will take the helm as acting superintendent.

In mid-May, Collins and the board negotiated her departure after a string of financial problems came to light. Under that agreement, the board agreed to send off Collins, who had two years left in her contract, with $225,000. Before the end of the month, Collins had secured a job as superintendent for the Rutland Northeast Supervisory Union.

In a statement issued by the board, chairman Patrick Halladay describes Phillips as a "quiet but confident leader" who is well-respected by teachers and administrators.

"Having been curriculum director, Stephanie is uniquely positioned to prepare the district for successful implementation of the new federal common core standards this fall.”

A superintendent search committee plans to recommend that the full board appoint Phillips as the interim superintendent next month. The district's legal counsel, Joseph McNeil, explained that this recommendation is contingent on approval by the Vermont Secretary of Education. Phillips must also clear certain regulatory hurdles, including a criminal background check.

The board is also looking for a replacement for its finance director, David Larcombe, who resigned effective June 30.