Rice speaks at Norwich Amid Protests | Off Message

Rice speaks at Norwich Amid Protests 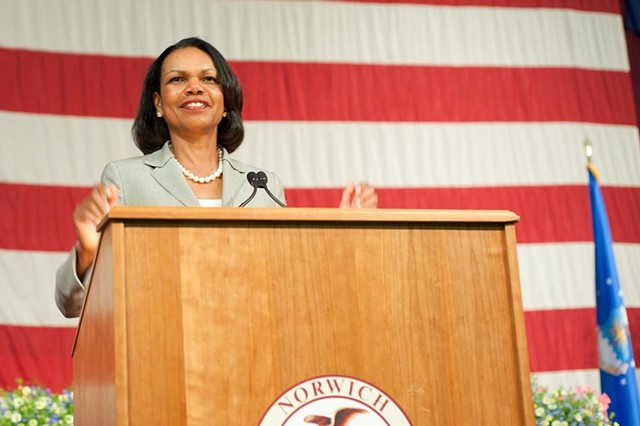 Protesters sprinkled throughout a crowd yelled "They tortured people!" and "Condi lied, people died!" during former Secretary of State Condoleezza Rice's remarks at Norwich University Thursday morning. A standing ovation from the crowd ultimately interrupted the protesters' shouts and they were escorted outside.

Rice, a key leader in the Bush administration who advocated for invading Iraq, told the audience that the U.S. must continue to be a global influence.

"The U.S. has to lead and step up. Why? Because we're the most powerful country in the world," she said. "We also represent an idea. It doesn't matter where you came from, it's where you're going."

She structured her speech around four shocks that she feels have influenced today's politics: the September 11 attacks, the financial crisis of 2008, the Arab Spring and what she called "Great powers behaving badly." She cited Vladimir Putin as an example, calling him a "humiliator and intimidator," and adding: "He's not the only great power behaving badly."

"People have had enough with an authoritarian, dynastic regime," Rice said. "People are seizing their rights. Democracy takes time, we need to be patient with people on that journey as it continues to be a journey for all of us."

A key topic in Rice's speech, a Q&A that followed and the protesters' shouts was Rice's role in pushing to invade Saddam Hussein's Iraq.

"We did not invade Iraq to bring democracy. We invaded Iraq because of weapons of mass destruction. It wasn't theoretical. He'd used them before," Rice said.

Although much of her talk focused on foreign affairs, she touched on issues including immigration reform and inequality. "The K-12 crisis is the single greatest crisis the U.S. faces today. Education is the key to fixing inequality," Rice said.

Speaking outside, activists were critical of Rice's justifications for invading Iraq.

"Condoleezza Rice, as national security advisor, authorized the attack on Iraq based on lies. There was no weapon of mass destruction, there were no chemical weapons, there were no al-Qaida terrorists in Iraq, there was no authorization from the United Nations, but she was part of the team that approved that invasion," said protester Andy Schoerke, one of those escorted outside.

Dave Ross, one of two protest organizers, disapproved of Rice speaking at a Norwich lecture series. "She's a war criminal, she should be on trial, not being held up as this wonderful, patriotic citizen to the next generation of American military leaders," he said.