Lake Champlain Fish Die-Offs the New Normal, According to Biologists | Off Message

Lake Champlain Fish Die-Offs the New Normal, According to Biologists 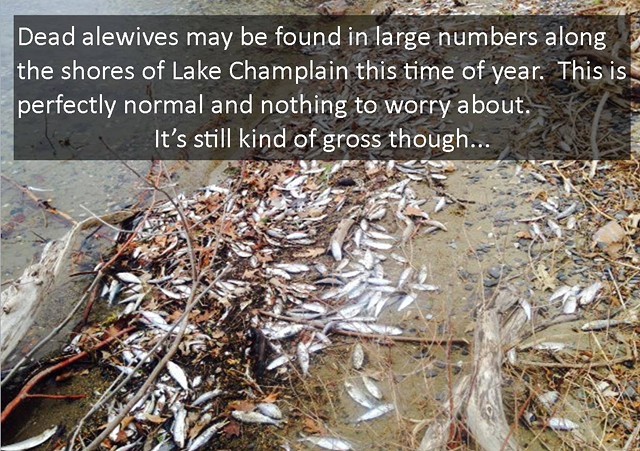 When 22-year-old Natalie Wheating headed to her Milton lakeside cabin last weekend to open up the camp for the season, she was startled by the sight that greeted her: "Hundreds, if not thousands" of dead fish were floating along the shore of the Lake Champlain.

Her first thought? "I just thought that something was being pumped into the water," said Wheating.

The reason for the die-off, according to Vermont Fish and Wildlife, is a little less dramatic: Fisheries biologist Bernie Pientka said that mass deaths among alewives, an invasive species of herring, are normal in Lake Champlain at this time of year. Biologists believe the die-offs are a result of temperature fluctuations, food limitations and stress on the fish population following the winter season.

"They're just not used to rapid temperature changes," said Pientka of the alewives, which first arrived in Lake Champlain in 2003. Alewives cause several problems for Lake Champlain. They outcompete native fish, such as rainbow smelt, and eat the eggs and larvae of other fish species. Alewives also cause major reproductive failure in landlocked lake trout and salmon.

While the die-offs are "perfectly normal," Pientka said they're still worrisome for fisheries biologists. They point to the problem of invasive species in Lake Champlain, and act as a reminder of what can happen to an ecosystem put off kilter by invasive species.

Will die-offs keep the invasive population in check? Pientka said it's not quite so simple as that. "It may knock them down a little bit in terms of population levels, but they’re still in there," said Pientka. What's more, because alewives have already outcompeted fish species on the bottom of the food chain, other species now depend on the invasive fish in their own diet. Predators could find themselves without enough to eat following a major die-off.

Fisheries biologists will keep a close eye on the alewife population, Pientka said, and try to balance the number of stocked fish being added to the lake accordingly. "It's a moving target," he said.

Alewife die-offs are also common in the Great Lakes, where beaches are sometimes closed for weeks at a time to bulldoze dead fish from the shore. Pientka urged lakeshore visitors to call Fish and Wildlife if they spot signs of a die-off. As for dealing with those unsightly (and eventually smelly) dead fish? Pientka suggested composting or burying dead fish in gardens or flower beds.

"It’s much more comforting now knowing that it’s normal," said Wheating — even if the new normal might be, as Fish and Wildlife conceded on their Facebook page, "kind of gross."