At Veterans Affairs Hearing, Sanders Cautions Against 'Rush to Judgment' | Off Message

At Veterans Affairs Hearing, Sanders Cautions Against 'Rush to Judgment'

As scandal subsumes the Department of Veterans Affairs, Sanders defends it. 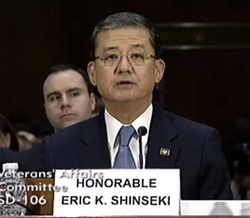 Sen. Bernie Sanders (I-Vt.) defended the Department of Veterans Affairs Thursday at the first Senate hearing since the VA became embroiled in a major scandal over patient waiting lists.

Two weeks ago, CNN reported that at least 40 veterans died while waiting for appointments with the Phoenix Veterans Affairs Health Care system — and that managers hid the wait times by keeping a secret list. Since then, the American Legion and several congressional Republicans have called for Veterans Affairs Secretary Eric Shinseki to resign.

Sanders, who serves as chairman of the Senate Veterans Affairs Committee, did not join those calls Thursday morning as he presided over a hearing featuring Shinseki and representatives of several veterans service groups. Though he said he takes the allegations "very seriously," the Vermont independent urged his colleagues to hold their fire until after an investigation by the VA's inspector general is complete.

"I believe that every member of this committee will do everything they can to get to the truth of these allegations," Sanders said. "But if we are going to do our job in a proper and responsible way, we need to get the facts and not rush to judgment. And one of the concerns that I have, to be very honest, is there has been a little bit of a rush to judgment. What happened in Phoenix? Well, the truth is we don't know. But we are going to find out."

Not all of Sanders' colleagues gave the secretary the benefit of the doubt. Later in the hearing, Sen. Dean Heller (R-Nev.) asked Shinseki why he has, thus far, refused to resign.

A retired four-star general, Shinseki said he has spent his five years as secretary working to provide better care and benefits to "the people I went to war with."

"This is not a job. I am here to accomplish a mission that I think they critically deserve and need," Shinseki continued. "And I can tell you, over the past five years we've done a lot to make things better. We're not done yet. And I intend to continue this mission until I have satisfied either that goal or I'm told by the commander in chief that my time has been served."

In his opening statement, Shinseki said that if the allegations leveled at the Phoenix VA prove to be true, the situation is "completely unacceptable."

"Any allegation, any adverse incident like this, makes me mad as hell. I could use stronger language here, Mr. Chairman, but in deference to the committee, I won't," he said.

In questioning Shinseki, Sanders asked why the VA had not acted upon previous warnings that claims backlogs were harming veterans.

“The criticism is that, year after year, reports have been made talking about these problems, and the problems continue to exist," Sanders said. "Can you give us some assurance of what happens tomorrow? Where do we go from here, so that we don’t have this hearing next year or two years from now?”

But in his opening statement, Sanders said it was important to keep in mind that in a system of the VA's size, many would inevitably find their care inadequate. The VA serves 6.5 million veterans a year and more than 200,000 a day, he noted.

“There is no question, to my mind, that VA health care has problems. Serious problems," Sanders said. "But it is not the case that the rest of health care in America is just wonderful: Everybody walks in, gets immediate care, gets great care, at no cost, it’s all affordable. That’s not the world we live in."

Citing a study published by the Journal of Patient Safety, Sanders said that more than 210,000 patients a year die from preventable medical error — making it the third-leading cause of death in America.

“Have deaths been reported from medical errors in the VA? The answer is yes. And every one of those deaths is a shame and something that we have got to address," Sanders said. "But it’s not just the VA.”